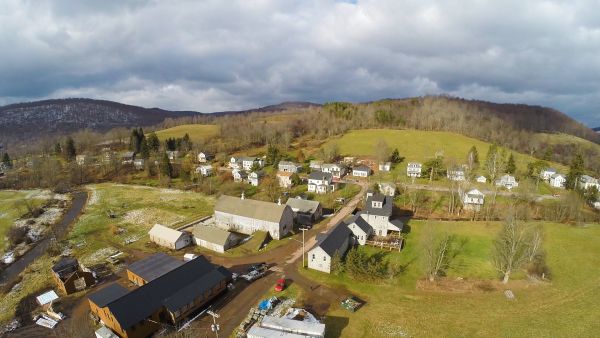 The dairy barn at the center of this aerial view is flanked by other buildings that are part of the Hilson farm, purchased by the Livestock Foundation. The black-roofed brick structure is the Bovina creamery. Photo by Jessica Vecchione.

A couple years ago, Bovina resident John Finn, founder and CEO of Indiepay, which has offices in Delhi, was sitting around with his partner, Wendy Buerge, and his brother, Delhi dairy farmer and cheesemaker Dan Finn. They were talking about the difficulties of small-scale farming—which Dan knew about first-hand—and the budding resurgence in farming in and around Bovina, where the Finns grew up. They wondered if there was something they could do to help it along. The Hilson Bros. grocery store on Route 6 in the hamlet of Bovina Center had been shuttered for decades—what if they could turn it into a farm-to-table restaurant showcasing food grown and raised in the area? Just steps away, the old Bovina creamery, too, was vacant—was there some way to get it up and running again so that dairy farmers had a place to take their milk? And the farm next to the creamery—could that again be home to dairy cows whose milk could be processed next door and the dairy products used in the restaurant just up the block?

The Hilson store in 1943. Photo possibly by Jim Hilson.

Recently, the Finns, Buerge, and others they have partnered with have taken another step towards making those ideas a reality. Bovina Valley LLC, the company John Finn set up to operate all these coordinated efforts, already owns the grocery store and the creamery and is cracking ahead with renovations to both buildings so that the creamery can open this summer and the restaurant next year. And now the company’s non-profit education arm, the Livestock Foundation, has purchased the Hilson farm next to the creamery. The farm consists of 55 acres and five buildings including a large dairy barn dating to 1929. The seller was Tom Hilson, whose great great grandfather started the farm in the 1880s; for many years Hilson operated the farm before renting it out and finally closing down operations three years ago. The terms of the sale, which was finalized in December, were not disclosed.

The purchase of the Hilson farm brings to four the number of properties within steps of each other under the control of Bovina Valley LLC and the Livestock Foundation. This includes not only the farm, creamery, and future restaurant, which is to be called Dry Town Tavern, but also an 1840s house next door to the restaurant that will operate in conjunction with the restaurant, offering five inn rooms.

“We wanted to preserve these buildings and make them as good, if not better, than they once were,” said John Finn by phone. “The idea is to recreate something that existed 100 years ago, yet with a twist—contributing to tourism, entertainment, a place to stay, and value-added dairy products.”

The Livestock Foundation hopes to turn the second floor of the horse barn into an exhibit space devoted to the history of Bovina dairy farming. Photo by Sonia Janiszewski.

A recent tour, conducted by Sonia Janiszewski, the newly hired executive director of the Livestock Foundation, shows progress towards those goals. Considerable work has been done on the creamery, a 1942 brick building that replaced a 1902 wooden one that burnt down. The creamery operated until 1973 and then served as an auction house for many years before being shuttered. Today the building, whose change in ownership was first reported in the Watershed Post last March, has a new roof and refurbished windows. Inside, the vast, high-ceiilinged space where auction-goers used to sit on folding chairs will, once again, be the main production floor. Towards the back of the building, rooms have been created for heating and cooling yogurt and brining and aging cheese.

After the barn's interior is repainted and its plumbing repaired, it will be home to Cowbella's Jersey cows. Photo by Sonia Janiszewski.

The Bovina Valley Creamery, as it will be called, will produce dairy products under the Cowbella brand. Cowbella’s owner, Shannon Mason, whose family’s 200-year-old dairy farm is located in the Schoharie County town of Jefferson, has partnered with the Finns on the venture and will co-manage the creamery with Dan Finn. According to Mason, the facility will make butter, bottled milk, 2 percent Greek yogurt, full-fat cream-top yogurt, drinkable yogurt, mozzarella, parmesan and other part-skim Italian hard cheeses. Dan Finn will produce his acclaimed tome-style Alderney cheese there as well. Members of the public will be able to visit the facility and learn about dairy production while peering in through a big plate-glass window overlooking the action—a butter-molding machine shaping butter into blocks and other machines filling bottles with milk and cups with yogurt.

“I won’t have to transport milk from Jefferson,” she said.

The goal, she added, is to use all the milk from her cows and Dan Finn’s cows in the Cowbella products. If the milk from their cows can’t meet demand for those products, they will buy milk from “other like-minded small farms that graze around the area—and pay them what they should be paid for their product,” she said.

The dairy barn was built in 1929. Photo by Sonia Janiszewski.

Just as visitors will be able to visit the creamery, they eventually will be able to tour the farm, says Janiszewski. She hopes that by next year there will be a space in the horse barn next to the dairy barn with exhibits on the history of dairying in the Bovina area, organized with the assistance of Bovina historian Ray LaFever. In an email LaFever noted that in making renovations to the Bovina buildings the Livestock Foundation and the Bovina Valley LLC are being “very sensitive to the history of these buildings as they make them functional for Bovina in the 21st century.”

Tom Hilson, for one, is happy with the plans for his former farm. “What I feared was going to happen was that the buildings would slowly deteriorate,” he said. “I’m overjoyed that someone wanted to use it as a dairy farm again.”

Hilson farm buildings, possibly in the late 1930s or early 1940s, with Archie Hunter, an employee. In the background is the house that will have inn rooms and operate in conjunction with the Dry Town Tavern. Photo courtesy of the Hilson family.