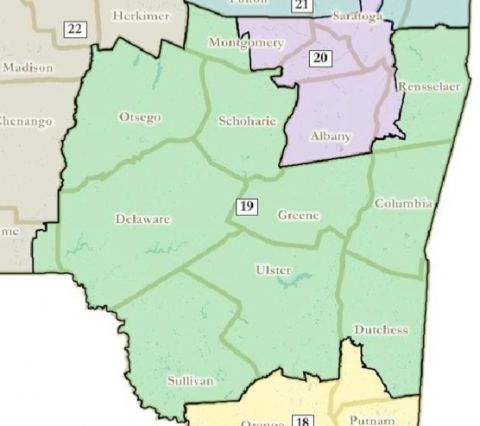 It took a federal court to get it done, but New York State finally has its Congressional districts mapped -- with hours to spare before candidates could start gathering signatures. The New York Times reports:

The judges acted with a sense of urgency because Tuesday is the first day that New York candidates for Congress can collect signatures to qualify for a spot on the state’s primary ballot. The primary was previously moved up to June 26 by order of another federal judge, who acted to ensure that New Yorkers serving overseas in the military would have enough time to vote by mail.

On March 19, a panel of three judges finalized the lines on a map of New York State Congressional districts. Unless they are challenged in court, these districts will stay in place for the next ten years.

Locally, there are some big changes. Because of population shifts, the state now has a reduced number of Congressional districts, moving from 29 to 27. Gone is Maurice Hinchey's meandering 22nd District, which covered much of the Catskills region and reached westward to encompass Ithaca and Binghamton, and has now been folded into neighboring districts.

The Catskills region is now entirely within the 19th District, the territory of incumbent Republican Chris Gibson, who currently represents the bizarrely-shaped NY-20.

On Monday, March 19, Schreibman beat out Tyner 4-1 at the Ulster County Democratic nominating convention. But Tyner is a long way from beaten: Mid-Hudson News reports that he "vowed to force a primary" against Schreibman.