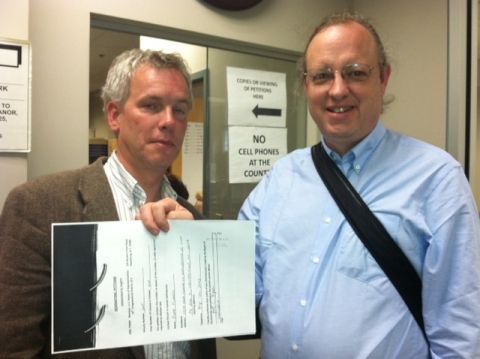 Above: Joel Tyner and campaign volunteer Burr Hubbell hold a receipt for 2,350 signatures filed with the New York State Board of Elections. Photo by Jess Vecchione.

It can't be easy being Joel Tyner. While the four-term Dutchess County legislator has been touting his progressive record to voters across the Catskills and Hudson Valley, the more moderate Julian Schreibman, who has never held elected office, has been hoovering up endorsement after endorsement from county Democratic Committees. (In what must have been a cruel blow, Schreibman got the endorsement of the progressive-left Working Families Party. As longtime political observer Hugh Reynolds noted, "If anybody epitomizes the values of the WFP over a long career in politics, it’s Tyner.")

But if the local Democratic machine's love affair with Schreibman is bothering Tyner, he's not letting it show. Tyner's counting on the people of the newly drawn 19th District, which includes a good chunk of Maurice Hinchey's old stomping ground, to send him to D.C. Today, Tyner turned in 2,350 signatures -- well over the 946 required to get him on the ballot for a June primary, though some will inevitably be challenged.

We recently spoke with Tyner about his campaign, his thoughts on the new 19th Congressional District, and why he thinks he's the man for the job. In the weeks to come, we'll be running interviews with the other two major candidates vying for the seat: Schreibman, who will face Tyner in a Democratic primary on June 26, and incumbent Republican Congressman Chris Gibson of the old NY-20. -- Lissa Harris

Joel Tyner: I’m sort of a populist progressive, living proof that you don’t have to cave or capitulate or compromise on core progressive Democratic values. That’s a big reason why I’m running this campaign. Maurice Hinchey proved that it’s not just a moral imperative, it’s a winning message to be a progressive Democrat.

I would say that maybe there wouldn’t be the space for this sort of independent grassroots progressive populist campaign -- this might not be the time or place for it -- except for Tahrir Square in Egypt, and Tunisia, and Madison, Wisconsin, and Zuccotti Park turning into Liberty Plaza. I’m 48 years old, I’ve been waiting all my life for this type of an uprising.

WP: What do you think of the new 19th Congressional District?

JT: It’s really doable. There still may be a slight Republican registration advantage, but apparently it’s much more favorable to Democrats and Democratic candidates than the old Chris Gibson district. We can do this.

WP: Your potential primary opponent, Julian Schreibman, has strong support from the Democratic committees. Are you as viable a candidate?

JT: I think I’m a heck of a lot more viable than the guy who’s been anointed. People are sick of same-old, same-old machine politics. They want something different. That’s what I offer. I’ve already said repeatedly, publicly: If I lose the primary, I will go out there and slave for Julian Schreibman. But I think if you’re a progressive Democrat, you have no excuse right now.

WP: You’re from the Hudson Valley. What do you offer those of us in the Catskill Mountains?

JT: The Catskills are beautiful. There’s a lot of farming out there, but the economy is hurting. Speculation and corporate agribusiness and failure to enforce the Anti-Trust Act are absolutely killing the small and mid-size independent family farms. Also, there’s the fracking issue. It’s ridiculous.

WP: Where are you on fracking?

JT: Because of my extensive ties and contacts in Sullivan County, I started a petition back in 2008 against fracking. There’s 1,100 people signed on. That’s why Josh Fox [director of the anti-fracking documentary Gasland] has endorsed my campaign. I am running against Chris Gibson, but I’m also running to send a strong message to Barack Obama. How dare you promote fracking in your State of the Union Address? It’s just absolutely ridiculous. How dare you jeopardize our health by pushing fracking?

WP: The Affordable Care Act is being weighed in the Supreme Court right now. How do you think this will shake out? What do you want to see happen?

JT: Single-payer is the real solution. Obamacare, the Affordable Care Act -- it’s not perfect, but it’s a step in the right direction. Without it, 33 million people are going to lose their health care. [But] I’m running to send a message to Barack to remind him what he was. If we send more people like me and Maurice Hinchey to Washington, maybe we might actually have the public option. You don’t let the whole world know what you’re willing to be negotiated down to. You stand up principled and proud for what should be happening.

WP: If you stick to your convictions, is there still room to reach “across the aisle,” work with Republicans, and get things done?

JT: I know there is because I’ve proven it over the last decade. I won five times in a row in Rhinebeck and Clinton, two towns with Republican town supervisors. I’ve had conservatives, independents, and Republicans tell me, year after year here in Dutchess County, that they support me, because they know I’m something different. They know I’m not afraid to take it to the power structure of both sides.