Recent evacuations below the Pepacton: Better safe than sorry? 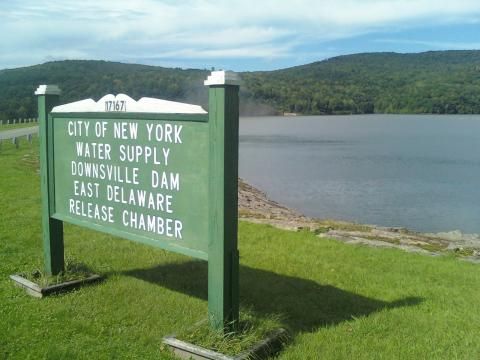 In the aftermath of Irene and then Lee, Town of Colchester Supervisor Robert Homovich, is breathing a sigh of relief that Downsville, Horton, Harvard, Corbett and Shinhopple were spared serious damage from the flood waters.

But Homovich is angry with what he characterizes as a “lack of accurate figures” by Department of Environmental Protection (DEP) officials about the volume flow from the Pepacton Reservoir. Homovich says that on Sunday, August 28th, he was notified by DEP officials in Grahamsville that he should anticipate a peak flow of 30,000 cubic feet per second (cfs) -- a flow rate that would have caused catastrophic flooding below the reservoir.

The predictions, which came from the National Weather Service and were passed on to local officials by the DEP, incited hasty evacuations in towns below the reservoir -- evacuations that turned out not to be necessary. Weather prediction is not always an exact science, and in this case, rain that tapered off earlier than expected meant that Downsville and other downstream communities were spared from a worst-case scenario. But Homovich is still upset with the official response from the DEP.

Homovich stated that the notification took place four hours before the reservoir was to peak, which he states, “would never have been enough time to evacuate everyone.” Emergency Services Director Richard Bell contacted DEP officials to clarify the disastrous projected numbers, which when confirmed, inspired mass evacuations throughout the Delaware River Basin. The evacuations took place with assistance from five different fire departments, the New York State Police and a swift water rescue team from Johnson City.

Homovich said, “Here we are reacting to numbers that are supposed to be accurate and the consequences of not reacting to those numbers would have been loss of life, so we started an evacuation to the Downsville school.” The flood inundation maps then projected that the Downsville School would also be under water, so evacuees were re-directed to Walton Central School.

The actual flow rate from the storm was measured at 12,827 cfs, dramatically below the DEP’s estimate. Homovich felt that there was a delay by DEP officials in notifying Delaware County Emergency Services of the projected flow rates which did not follow the emergency action plan protocol. “It put a lot of people at risk” Homovich said. “It caused a lot of upset and fear.”

Though Homovich says he doubted the projected estimates, and repeatedly questioned Delaware County Emergency Services, he followed the evacuation protocol. “That amount of water would have been catastrophic.”

“This wasn’t a minor situation. This is a situation that we just can’t have. We depend on the information (provided by the DEP). It tells us what roads need to be closed and what areas need to be evacuated. It caused a hell of a panic for our people.” Homovich stated.

Farrell Sklerov of the Press Office of the DEP, responded to Homovich’s concerns, “The National Weather Service, not the DEP, provides projections of flow rates.  DEP communicates these projections to towns downstream (of the reservoirs), so they can make the most informed decisions. This protocol was followed before, throughout and after Hurricane Irene. Though the exact predictions made by the National Weather Service did not bear out—as can happen for extraordinary weather events such as hurricanes—the evacuation based on the projected flow rates was the right decision, just like in New York City, when approximately roughly 370,000 people from flood zones and the Rockaway Peninsula were evacuated ahead of Hurricane Irene. If the storm hit the city as hard as originally forecasted and there was no evacuation, the impact would have been far worse had it not been for the prudent decision to be safe rather than sorry.”

According to Dave Nicosia, Warning Coordination Meteorologist for the National Weather Service (NWS) in Binghamton,  Sklerov is correct. “The facts show that it was over-forecast.” Nicosia explained that flooding is forecast by collecting information from US Geological Survey gauges which measure depth and pressure at the base of the dam and streams, rivers or waterways where gauges are situated.  The pressure is then converted to flow rate and flow rates are then converted to flood stages. These measurements, Nicosia said, are then transmitted every five to ten minutes via satellite. That information is then compiled with river models and forecasted rainfall.

“The inundation maps showed an over-simulation at that point, because the rain had tapered off  in western portions of Delaware County," he said.

Nicosia said that the flooding in the region was unprecedented, and so the unusually high flow rate predictions seemed possible.

“We were seeing records coming out of Margaretville. It shot up so fast that it got everybody’s attention.”  Nicosia continued, “Our models showed that we were going to see records never seen before and we don’t take chances. “

Nicosia said that there is an inherent error in  river forecasting, “We cannot put gauges out every 50 yards.”

The landscape of Delaware County adds an additional variable and margin for error, “One problem in the Catskills is the response time of streams and creeks.  Between the time of a heavy rain to the time the creeks come up is so small; we would have to forecast exactly how much rain is going to fall in every single place in the basin, and that is impossible. The science is just not there yet.”

Nicosia said that the NWS advised a forecast of 20,000 cubic feet per second (cfs), not 30,000 cfs as reported from other sources.

The National Weather Service began projecting spill rates of the reservoirs after the flood of 2006. After each flooding event, Nicosia says the NWS does an assessment, “We go back and look at the projections. The model is tweaked if necessary.  It is something that we are continually improving.”

Homovich feels as though this is a learning opportunity for everyone. “The good thing about this is it showed us that the plan in place failed. It needs to be revisited and corrected.”  Homovich has scheduled a meeting between the Towns of Colchester and Hancock, the National Weather Service, Delaware County Emergency Services and the DEP to review and perhaps revise the emergency action plan. Homovich would like the  protocols clarified and the  responsibilities of each agency outlined.