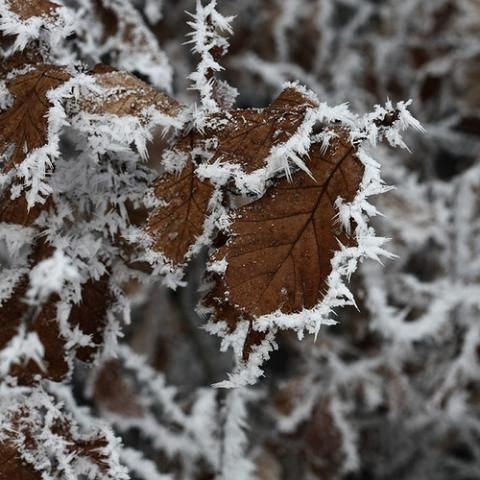 Winter is icumen in. Photo of frost on leaves by Flickr user s.alt. Published under Creative Commons license.

This year, a federal program that one in five New York State households rely on to help pay their winter heating bills is likely to face drastic cuts. In response to budget proposals coming out of Washington, New York State officials have already scaled back the scope of the Home Energy Assistance Program (HEAP) -- announcing that the program would be cutting benefits, delaying the start date of the program from November 1 to November 16, and cutting almost two months off the end of the season, meaning that heating aid will be available only until mid-March, when snow is still on the ground in much of upstate New York.

The White House's proposed budget would cut the funding for the program almost in half, the Times Herald-Record reports, in a year when energy costs are up dramatically:

The president's proposed 2012 budget reduces money for the program by almost half, from $5.1 billion to $2.57 billion.

The proposed reduction comes as property owners and renters will pay more for electricity, heating oil and propane this winter.

Current residential heating oil prices average $3.86 per gallon for the state, up from $3.10 the first week of October 2010, according to an Energy Information Administration.

The Michigan Messenger reports that the House and Senate are also proposing cuts, though less drastic ones:

Back in Washington, lawmakers in both parties are resisting Obama’s proposed $2.6 billion budget for the program. On Sept. 20 the Democratic-controlled Senate Appropriations subcommittee recommended $3.6 billion for the program. Last week, the Republican-controlled House subcommittee approved $3.4 billion for LIHEAP, almost 40 percent more than the president proposed.

Some elected officials from states that will be hard-hit by the cuts are calling for funding to be restored to the program. The Boston Globe reports:

Officials from Connecticut and an organization of Northeastern states put pressure on Congress on Friday to fund the federal home heating assistance program at least as much as it did last year, predicting dire consequences if deep cuts are enacted.

U.S. Rep. Chris Murphy, a Democrat from Connecticut, said the proposed reductions contained in various budget bills “will be the difference between life and death’’ for many of his constituents.

The federal budget has not yet been finalized. But regardless of the outcome, New York State officials do not expect to see the program restored to its former level of funding. The Daily Star reports:

Marc Kaplan, a spokesman for the Office for Temporary [and] Disability Services, said New York last year received a total of about $521 million in federal HEAP funds. President Barack Obama's proposed federal budget would channel only about $247 million for HEAP grants in New York. Both the U.S. Senate and House of Representatives are pressing for more money -- although still below what was dispensed last year, he said.

"We still don't know how much Washington will be giving us," Kaplan said, pointing out that a reduction [was] likely based on all possible scenarios.

Map created by the Watershed Post from U.S. Census data and figures from the NYS Office of Temporary and Disability Assistance. Counties with greater percentages of households relying on HEAP are in darker blue. To see statistics for each individual county, click on the map.

To figure out which parts of the state will be most heavily affected by the cuts, the Watershed Post combined data from the U.S. Census and the New York State Office of Temporary and Disability Assistance, and calculated the percentage of the households in each county in New York State that received HEAP benefits last year.

The numbers paint a dramatic picture. Statewide, over 1,500,000 households -- approximately one in five -- relied on HEAP to help pay their heating bills over the past winter.

Of the 57 New York State counties outside New York City, over half -- 32 counties -- have over 20 percent of households enrolled in HEAP. This number includes all but one of the five counties of the Catskills region: Delaware County has 23.8 percent of households enrolled in HEAP, Greene has 23.5 percent, Schoharie has 22.7 percent, Sullivan has 22.6 percent, and Ulster has 18.3 percent.

Thirteen counties have over 25 percent of households enrolled in the program, as does New York City.

Like other public assistance programs (like the food stamp program), the ranks of the HEAP program have swelled dramatically in the last few years as the economy has declined.

In areas that have been devastated by the flooding from Irene and Lee, where many people have recently lost their homes, jobs, or businesses, cuts to heating aid will be even more keenly felt.

The data we used in this story are stored in a public document on Google Fusion Tables. Feel free to borrow or embed our map and/or data table; please credit us with a link. To create the data, we used statistics from the U.S. Census Quickfacts and the NYS Office of Temporary and Disability Assistance. Thanks to OTDA's Marc Kaplan for providing numbers on HEAP enrollment by county.

A note on the map: Because OTDA data for HEAP participation in New York City is not broken down by borough, for the purposes of this map, we have merged the five counties/boroughs of New York City.