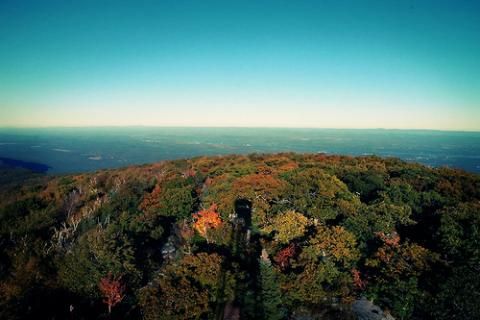 The New York State Department of Environmental Conservation announced today that because of dangerous conditions in the wake of widespread flooding, all the hiking trails on DEC-managed land in Greene and Ulster Counties would be closed, and that state campgrounds across the Catskills region would remain closed, until further notice.

Adam Bosch at the Times Herald-Record reported earlier today that many local parks and campgrounds sustained damage in the flooding, including Minnewaska State Park in Ulster County (maintained by the Palisades Parks Conservancy):

Four foot bridges at Minnewaska were destroyed, rushing water chewed a huge chunk out of the Awosting Falls Carriage Road, and managers closed the main entrance after a stream eroded a bridge near the toll booth.

While some other parks in the region remain open, including Minnewaska, the DEC is not taking chances with the parks it manages. From an update posted today to the DEC's website:

Unsafe conditions remain in much of the backcountry of the Catskills due to the aftermath of Hurricane Irene and heavy rains which continue to cause flooding, bridge wash outs, trail wash outs, downed trees and other debris. In addition, many local roads are closed or only single lane traffic. As a result, DEC has received local requests to close trail heads in these impacted areas in an attempt to keep the roads open for local residents and emergency vehicles.

Heavy rains across central New York and the Southern Tier have caused flash floods in some areas. DEC managed areas may be inaccessible and have not been fully assessed for damage at this time. Plan accordingly and be prepared to turn back when conditions warrant.

Many DEC Campgrounds in the Adirondacks and the Catskills experienced significant damage from the storm including flooded areas, road destruction and loss of electric and water service. Campgrounds in the Adirondack Park and in all of the Catskill Preserve are being assessed and evaluated daily and are opening based on their accessibility and safety.

Given the weather and imminent return of flooding to the Northern Catskills and beyond, DEC will not reopen the Catskill regional campgrounds this weekend. In addition, all DEC campgrounds in Delaware, Greene, Sullivan and Ulster counties will remain closed until further notice.

A list of open and operational DEC campgrounds is continuously being updated on DEC's website. The public should be aware that many state and local roads may be inaccessible to travel and access to campground areas could be limited. Those planning to visit the Adirondack or Catskill regions this weekend should call ahead or check for road closure information at the Department of Transportation's webpage on the right hand column.

Catskills: Trails in the Catskill backcountry have been heavily impacted and the public is advised to avoid the backcountry at this time. Due to damage to roads, many trailheads and other access points to the backcountry are inaccessible. All trails on DEC-managed property in Ulster and Greene counties are closed until further notice.

Adirondack Area openings: The eastern zone of the High Peaks Wilderness and Giant Mountain Wilderness areas has been re-opened effective Thursday, September 8. Due to the amount of damage to certain trails, and the continued closure of a section of route 73 and other roads, Dix Mountain Wilderness area and a number of trails in the reopened areas will remain closed. However, the majority of trails are now open for public recreation.

Trails that are not closed still may have bridges washed out and water levels in most rivers and brooks are at spring-high water levels. Crossings may be impassable at this time. These trails may also have blowdown, eroded sections or flooded areas. Pay close attention as many trails have been rerouted to avoid heavily damaged sections and eroded drainages can be mistaken for trails. The ability to navigate with a map and compass is important.

Hikers and campers should expect to encounter flooding, bridge wash outs, trail wash outs and blowdown when entering the backcountry. Hikers are advised to plan accordingly and be prepared to turn back when conditions warrant.