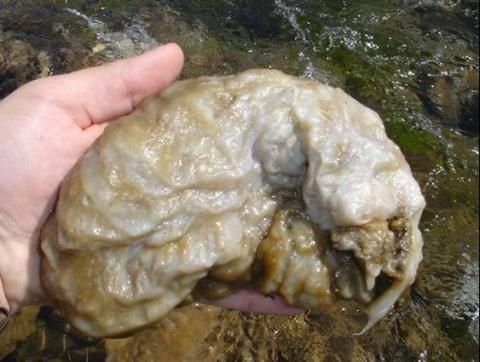 In today's New York Times: A number of states are thinking about banning felt-soled waders, a piece of gear that's perfect for keeping anglers steady on their feet -- and also for transporting the noxious microscopic algae known as didymo, or "rock snot."

“If you were trying to design a material to transport microscopic material around,” said Jack Williams, an expert on invasive species with the environmental group Trout Unlimited, “felt on the bottom of someone’s boots in a stream would be as close to perfection as you could find.”

The response among fishermen threatened with the loss of soles that cling to slippery rocks parallels the five stages of grief.

There is denial (the science is wrong), anger (why should I fall on my tail for the good of the planet?), bargaining (I will wash them, I will disinfect them, I will dry them), depression (I cannot afford new boots) and, finally, acceptance (I will go feltless if I must).

New York State has yet to ban felt-soled waders. Locally, the Esopus Creek, a favorite destination for flyfishers, has already been infected with didymo, and local flyfishing and conservation groups are desperately trying to keep it from spreading to uncontaminated rivers. Once infected, the river bottom sprouts a thick, slippery mat of didymo, decimating the habitat of the insects that trout feed on.

It's heartbreaking that flyfishers -- people who care fiercely about the health of the rivers -- are the ones spreading the algae.

And it's an all-too-familiar story: Scientists also fear that white-nose syndrome, a fungus that's destroying bat populations across North America, is being spread by cavers and spelunkers. Many caves have been closed to exploring in a last-ditch effort to save the bats, but it may be too late, according to the authors of a recent Science paper. The Boston Globe's Beth Daley reports:

Frick cautioned there is still great uncertainty about what nature has in store for the bats, but said, “This is one of the worst wildlife crises we’ve faced in North America.’’