Little brown bat: A death sentence, and a glimmer of hope 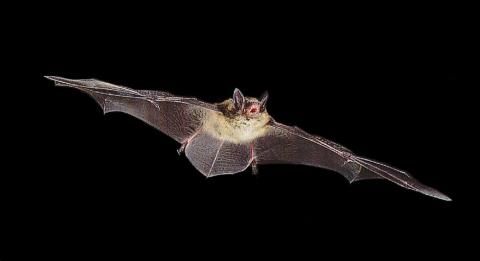 A paper published in the prestigious research journal Science on August 6 makes a dire prediction: The little brown bat, the Northeast's most common bat and an important species in the ecology of the region, could become extinct in the region within 16 years.

(The executioner, in case you haven't been reading the news lately, is white-nose syndrome, a fungus that attacks hibernating bats over the winter and causes them to emerge from hibernation early, causing massive fatalities in caves that once were teeming with bats.)

In the team's worst-case scenario, which assumes that 45% of the little brown bat population continues to die each winter, there is a 99% probability of regional extinction within 16 years. "That hit us like a brick," Kunz says. (The little brown bat lives throughout North America, so the species itself won't go extinct). If mortality declines to 10%, some little brown bats would last for 80 years, but the population would be dramatically smaller. Because brown bats eat a large amount of insects, including pests, a decline in their number could threaten farm fields and forests.

Andrew Revkin of the New York Times's Dot Earth blog questioned one of the paper's authors, bioinformatics researcher Winifred Frick. The good doctor offers a slim ray of hope for our dying bats:

The evidence that the fungus occurs throughout Europe, but we don’t see massive die-offs in Europe could be encouraging news that there are resistant individuals or subpopulations. We don’t have very strong evidence of resistance in North America yet, but it may be too soon to tell. We certainly hope there are resistant individuals and enough of them to sustain the populations and species threatened by this disease.