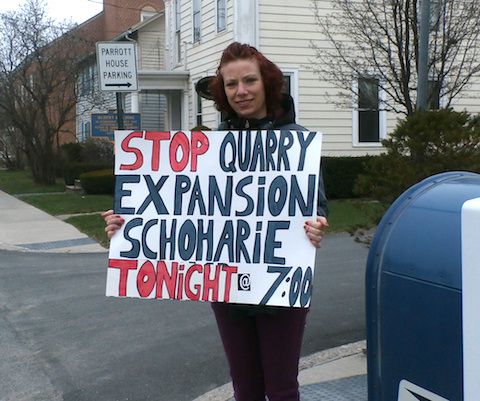 Above: Jenna Risse, a resident of the town of Schoharie, protests mining expansion in April 2016. Photo by Timothy Knight.

Following months of spirited public opposition to a proposed settlement between the town of Schoharie and Cobleskilll Stone Products (CSP), Schoharie town board members voted to reject a settlement with the mining company at the town’s monthly meeting on Wednesday, August 10.

The decision comes after a series of tense public meetings in which town residents voiced opposition to the proposed settlement, which would have ended 11 years of litigation between the town and the company. The settlement would cost the town over $500,000 and allow the quarry to expand its mining operations.

Over 100 residents attended a public hearing held on the proposed settlement in April, with many blasting the deal in front of a packed audience at the Schoharie United Presbyterian Church.

The terms of the settlement, had it been approved by the town board, would have both affirmed CSP's vested rights to expand its mining operations and ended the municipality's role opposing all permitting involved in mining, including ceasing the town's involvement in an ongoing proceeding with the New York State Department of Environmental Conservation.

The settlement would end litigation that was initiated by CSP in 2005 following the town's adoption of zoning laws that prohibited the expansion of the quarry.

Above: The exterior of Schoharie's town hall. Photo by Timothy Knight.

Introduced at the tail end of Wednesday’s meeting, the motion to reject the settlement was made by Councilman Matt Brisley and seconded by Councilman Floyd Guernsey III.

Brisley has made multiple motions to drop out of the proposed settlement at past town board meetings.

Allotted one final chance to speak out on the controversial proposal, the packed town hall of 50 residents took the opportunity to yet again signal their support for continuing the town's legal battle against CSP, even to the point of raising taxes.

One resident, Bob Mensing, was applauded after he told the town council, "I have no problem with my taxes being increased to fight for what is right."

In the end, three town council members—Brisley, Guernsey, and Alan Tavenner—voted not to settle, while James Schultz was the only vote in favor of the settlement.

The room burst into applause and a standing ovation when the motion passed.

Schoharie Town Supervisor Chris Tague, who is also the longtime general manager of CSP, excused himself from the discussion and vote in an attempt to avoid the appearance of bias. Tavenner, who serves as the town's deputy supervisor, has presided over all of the municipality's proceedings on the matter.

"The people have spoken"

After the meeting, Brisley said that the town board had come to the conclusion that the town's residents were opposed to the proposed settlement and that the board had acted accordingly.

"The people have spoken," he said.

However, the tussle with the mining company is far from over. As reported by the Times Journal earlier this month, the next trial date with CSP on land use issues is scheduled to begin in the end of October.