Above: Dawn Johnson addresses the Schoharie Town Board before a crowd concerned residents. The audience was too large for the town hall, so Wednesday's town meeting was moved to a nearby church. Photos by Timothy Knight.

Schoharie residents came out in full force this past Wednesday, April 13 to publicly air their concerns that a local quarry managed by Cobleskill Stone Products (CSP) may be able to expand its mining operations.

Spurred by the anti-mining expansion organization Save Our Schoharie (SOS), the outcry is in response to a proposed settlement between the town of Schoharie and CSP that was announced in March after 11 years of litigation between the two parties.

Over 100 residents filled the town hall in anticipation of the town board's regularly scheduled monthly meeting, prompting the town council members to move the meeting to the nearby Schoharie United Presbyterian Church to accommodate the overflow crowd. 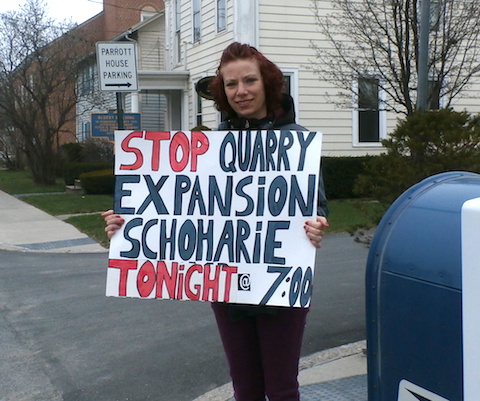 Above: Jenna Risse, a resident of 203 Warner Hill Rd., said that the proposed mine expansion would be "less than fifty feet from my backyard." She added that she didn’t know if her home will be habitable with mining that close to her property.

Supervisor, a mine employee, recuses himself

Schoharie Supervisor Chris Tague recused himself from the proceedings on Wednesday night, leaving deputy supervisor Alan Tavenner to preside over the meeting. Tague, the longtime general manager of CSP, has attempted to avoid the appearance of bias in the ongoing battle since his election last fall.

Peter Johnson, a Schoharie resident and the treasurer of SOS, kicked off the more than two-and-a-half-hour-long public comment session.

“All of us want to see this dispute resolved," he said. "This is not the way to do it."

Warning that "Schoharie will become a mining town" if the settlement is approved, Johnson urged the town board to "listen to the people." His comments were echoed by speaker after speaker, including resident John Wilkinson, who called the proposed settlement a "disaster."

Five hundred and ninety one people have signed an online petition opposing the settlement created by SOS.

The settlement would end over a decade of litigation that was initiated by CSP in 2005 following the town's adoption of zoning laws that prohibited the expansion of the quarry.

In 2014, Schoharie County Supreme Court Justice Eugene Devine annulled the new zoning laws after finding that the town did not strictly adhere to the procedural requirements of the New York State Environmental Quality Review Act process when the law was adopted.

The Appellate Division's Third Department struck another legal blow against the town in March 2015 when it ruled that CSP was entitled to a New York State Department of Environmental Conservation (DEC) proceeding to determine whether the company had vested rights to expand their mining operations.

In response, the town passed a series of moratoriums to prevent CSP from expanding its mining operations while the municipality drafted a new set of zoning laws, which were approved in late 2015. The town has spent approximately $500,000 fighting the case since 2005, according to the proposed settlement, which has been made public. 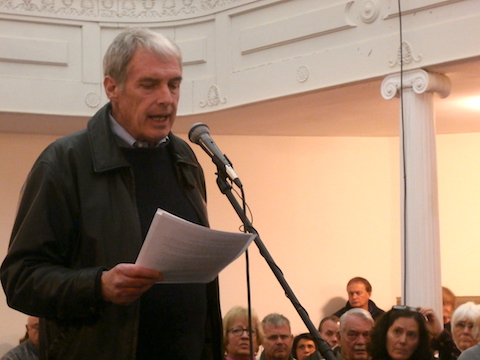 The terms of the settlement, if approved by the town board, would both affirm CSP's vested rights to expand its mining operations and end the municipality's role opposing all permitting involved in mining, including ceding the town's involvement in the DEC proceeding. Additionally, CSP would relocate Rickard Hill Rd. outside of the proposed expanded mining area.

At the meeting on Wednesday, village of Schoharie Mayor John Borst blasted the proposed deal by comparing the settlement to a straight jacket.

Although the agreement "reads that the quarry has offered concessions," Borst said that many of its proposed mitigations are already either required by state law or DEC regulations.

Borst argued that dust pollution caused by the quarry already blows particles into his home, the nearby public school and neighboring residencies. While the crowd cheered boisterously, he displayed a series of photographs in front of the town board members that depicted dust-filled athletic fields, backyards and grazing lands.

“The quarry is no contributor to the quality of life," Borst said.

Borst told the town board that it had a choice: Either preserve, protect and enhance the town, or “you're going to be the ones that flushed it."

“You guys are going to make history,” Borst said.

The church erupted into a standing ovation as Borst ended his speech by characterizing the proposed settlement as vindictive to those who have opposed it for the past 11 years.

Wrapping up the meeting just before 10 p.m., the Schoharie Town Board took no action on the proposed settlement. It will be voted upon at a later date.