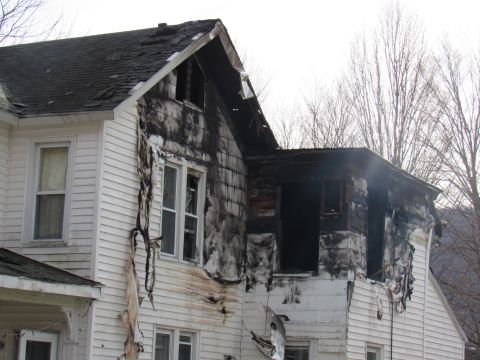 Above: Police say the body of a Walton man was found in this burned-out apartment in Walton. Photo by Robert Cairns.

Police say a man died in an early morning fire on Monday, Feb. 8 at an apartment house at 22 Benton Avenue in the Delaware County village of Walton. Four other people escaped safely.

Phillip Kirk, 66, was identified in a Walton Police Department news release as the man who was found, deceased, in an upstairs apartment after firefighters extinguished the flames.

Walton Fire Chief Bob Brown said that his department was dispatched to the building shortly before 4 a.m. after another tenant reported the fire to 911.

“We had a lot of fire coming from the back corner of the house,” Brown said.

Above: The house that burned in the village of Walton on Feb. 8. Photo by Robert Cairns.

Firefighters from Delhi and Trout Creek joined the Walton department at the scene. Brown estimated that about 40 firefighters extinguished the flames in less than an hour.

“We had it knocked down in pretty good shape, but it extended into the roof, he said.

No firefighters were injured during the assault on the fire.

Above: Walton firefighters and state investigators remained on the scene of a fatal fire on Monday afternoon. Photo by Robert Cairns.

Brown said that representatives of the American Red Cross had come to the scene and had made contact with those made homeless by the fire in an effort to assist them.

Delaware County Emergency Services Director Steve Hood said on Monday afternoon that the cause of the fire had not yet been determined.

Members of the county's “cause and origin” team, assisted by investigators from the New York State Office of Fire Prevention and Control, were sifting through rubble at the time.

Above: An investigator from the New York State Office of Fire Prevention and Control searching for clues to the origin of the fire on Monday afternoon. Photo by Robert Cairns.

“Essentially, right now, we're determining the cause and origin,” Hood said. “Typically, when there's a fatality, we bring in the state.”

Hood said it will be up to police and a medial examiner to officially state the cause of Kirk's death.

At 5 p.m. on Monday, the Walton Police Department issued a statement saying that the cause of the fire was accidental.

In a press release issued on Feb. 10, the Delaware County Department of Emergency Services announced that the fire was caused by an unattended cigarette left on the couch in Kirk's apartment. The building has been declared a total loss "due to the fire damage to the Kirk apartment and attic as well as extensive smoke and water damage to the remainder of the home," the press release stated.

Correction: Initial reports from police identified the man who was killed erroneously as Phillip Kurt. His name is Phillip Kirk.

More official details about the fire and death will be issued in a press release later today, the dispatcher said.

Lillian Browne at the Walton Reporter has filed a video report from the scene of the fire, which she says happened at 22 Benton Ave. in Walton early this morning.

Browne interviewed Deputy Fire Coordinator Dale Downin, who reported that the fire began on the second floor of a four-family house and moved up through the attic of the house. Downin said that the fire has been fully contained and is now out.