How to spend Labor Day in the Catskills 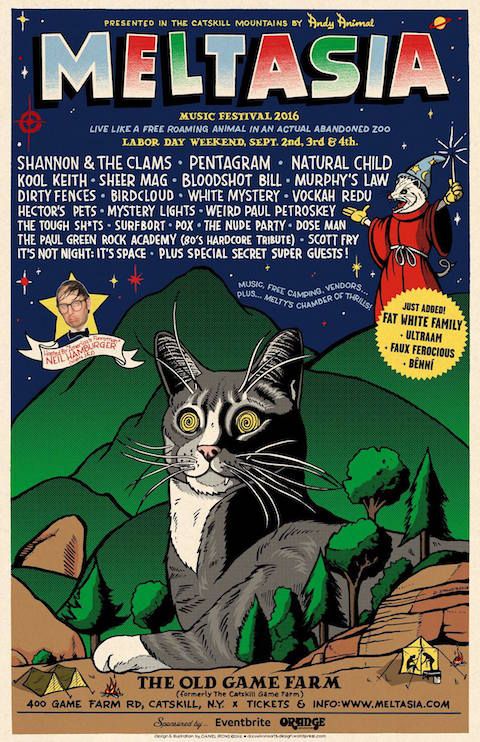 Above: A poster for Meltasia, a three-day festival being held at the former Catskill Game Farm this weekend, is a new twist on classic Catskills tourism posters.

Our long, hot summer is drawing to a close; harvest season is upon us. Time for some three-day-weekend fun, made all the tastier with the nip of back-to-school sweater weather in the air. Here’s our five-county guide to this diverse and lively Labor Day in the Catskills.

Above: A fire tower glowing at dusk. Photo courtesy of Laurie Rankin.

On Friday, Sept. 2, four Catskills fire towers that are dotted on some of the highest peaks across the region will be lit up like lanterns when darkness falls during the annual Lighting of the Fire Towers event. The volunteers who man the fire towers will hike lights up into the cabs fire towers on Overlook Mountain, Hunter Mountain, Balsam Lake Mountain and Tremper Mountain.

They’ll be rollin’ into Margaretville for the first edition of First Friday on Main: Retro Margaretville and Cruise In. Main street will be barricaded and reserved for cruisers and oglers, and there will  be ample live music, great food, art and demos, and samples of locally-crafted booze. The cruise is intended for “anything on wheels,” so, as the organizers say, come down, pop your hood and show off your ride--or just feast your soul on the communal good times and goodies on offer on Friday, Sept. 2 from 5 p.m. until 8 pm.

Above: Fred Woller's cycling art, which is being auctioned off as part of the Catskill Mountain Cycling Challenge.

In Arkville, mountain bikers of all abilities can ride four different scenic routes, including a "gravel grinder," while raising money for the Children's Cancer Recovery Foundation during the Catskill Mountain Cycling Challenge. The Catskill Recreation Center is hosting a day of cycling events on Saturday, Sept. 3, with cycling activities for kids, an online auction featuring Fred Woller's biking art, a free lunch, a T-shirt and day pass to the recreation center.

In the town square of Hancock, it’s time for the grand finale of 2016’s Summer Nights LIVE on The Square. Part of the Gateway Cultural Arts project, the series ends on a high note as The Moanin’ Frogs share their vaudevillian stylings and technical prowess with melodies from an eclectic mix of genres. They’ll be a-moanin’ from 6 p.m. until 7 p.m. on Friday, Sept. 2.

Above: Patricia Buckley performing in her own play EVOLUTION at FSC September 2, 3 and 4. Photo by Riikka Olson.

The Franklin Stage Company will be offering three performances of “Evolution,” a “moving, often funny, and ultimately heartbreaking tale of how humans endure, evolve, and move on” that was well loved by a sold-out house last fall. Friday and Saturday night performances on Sept. 2 and 3 are happening at 8 p.m.; there’s a Sunday matinee at 5 p.m.

Saturday is the day for cruising in Deposit, as Front Street fills with gleaming steel and chrome of the 6th Annual Car Show. Besides the vintage wheels, food and crafts, John O’Connor will be displaying his antique military weaponry. The show runs from 10 a.m. until 3 p.m., at which time they’ll cruise through the village en masse.

Come see how they labored in the Catskills back in the day. Saturday, Sept. 3 is this year’s final Free Family Saturday at the Hanford Mills Museum in East Meredith. Bring a child (anyone under 18 qualifies) and two adults can get in free for guided tours, live music and hands-on activities in a recreation of a 19th-century compound.

Come out to Plattekill Mountain in Roxbury on Saturday, Sept. 3 for the final edition of Music on the Mountain 2016, an afternoon of good old rock-n-roll with Talking Machine and a classic Catskills BBQ with all the trimmings, including fresh local corn on the cob. It’s on from 3 p.m. until 6 p.m.

Above: Kids get to make and wear their own silly hats at the West Kortright Centre’s Labor Day Party Extraordinaire. Above, Phoebe Johnson wearing a Wacky Wendy hat. Photo by Vanessa Van Burek.

Pack up the fam and bring your dancin’ shoes out to East Meredith for the 11th annual “Labor Day party extraordinaire” at the West Kortright Cultural Center, a family-friendly summer’s-end celebration of the region’s bounty with foot-stompin’ music and entertainment, fresh local eats, fab baked goods, art, silent auction, rummage and lots of kid fun. Happening Sunday, Sept. 4 from noon until 6 p.m.

Above: An “Edgar Allan Crow” Scarecrow at the 2015 Bovina Farm Day. Photo by Julia Reischel.

The former Catskill Game Farm, which has seen its share of troubles lately, is hosting a three-day festival called Meltasia from Saturday, Sept. 2 to Monday, Sept. 4. The former zoo’s abandoned grounds in Catskill are the highlight of the event: Attendees are invited to “live like a free roaming animal in an actual abandoned zoo.” Over 20 acts will play.

Come join the fine, fun folks at the Michael J. Quill Irish Cultural and Sports Center in East Durham for their first annual Family Fun Day on Saturday, Sept. 3. They’ll have carnival rides (free for the under-12 set), music, food and revelry from noon until 10 p.m.

Get nostalgic over at the Doctorow Center for the Arts in Tannersville with Hudson River Train and a “Live Broadcast of a Hometown Radio Variety Show” called “Kaaterskill Mountain Home.” Hosted by lutenist Carver Blanchard, the program will include actors and theater artists Anne O’Sullivan, Patricia Miller and Jim Wann; countertenor Drew Minter; and musicians John Tyson, Chris Zaloom, Leigh Draper and Tania Stavreva. The show begins at 8 p.m. on Sunday, Sept. 4.

Come join Sean “The Prankster,” EvilDan and Colleen the Sideshow Queen for a one-of-a-kind family-friendly journey down the midway at the Windham Civic and Performing Arts Center. The Psychic Sideshow will introduce you to original classics including The Carnival Punks, The Ball and Cup Con, The Flies, The Breadstick of Death and The Human Straw. The show is a burst of laughter, mystery and astonishment that’s been featured on the Tonight Show with Jay Leno. Happening Sunday, Sept. 4 at 8 p.m.

The Prattsville Art Center is thrilled to celebrate its 4th anniversary on Saturday, Sept. 3. You’re invited to join them starting at 4 p.m for Ninja Fest, a festival featuring free music, film and art “from the Mountaintop, the Hudson Valley, and NYC, plus Homer’s pulled pork and cornbread and farm to table veggies from Prattsville’s own Mossy Stone Farms. Dancing encouraged!”

This is the weekend to attend the 35th Annual Iroquois Indian Festival at the Iroquois Museum in Howes Cave. Come shop the invitational Iroquois Art Market, watch the Sky Dancers, listen to Onondaga storyteller Perry Grand and hear the Akwesasne Women Singers. Kids can do beadwork and make cornhusk dolls; wildlife rehabilitator Kelly Martin will bring the wildlife and her wisdom. The archaeology department will be there, demonstrating ancient skills and standing ready to help you identify that thing you found in the cornfield. Happening Sept. 3 and 4, 10 a.m. to 5 p.m.

Bring a kid or two out to Livingston Manor for the 2016 Library Labor Day Festival. Stock your shelves from the book sale while the kids partake of crafts, face painting, a mini chalk walk and other games (yes, there will be prizes) and have a drink and a snack. Festivities on Sunday, Sept. 4 from 11 a.m. until 2 p.m.

Feast your eyes on the fuzzy dignity of the Rosehaven Alpacas at Bethel Woods in Bethel on Sunday, Sept. 4 from 11 a.m. until 4 p.m. It’s part of the ongoing seasonal Harvest Festival: a farmers’ market, craft village, children's activities, live music and special programming, all in a family-friendly atmosphere celebrating local products and green initiatives.

Come sway to sweet doo wop at the Dead End Cafe in Parksville, where the sweet ‘50s harmonies of The Brooklyn Time Machine will be followed by a buffet feast. Show at 3 p.m. on Sunday, Sept. 4.

Live standup comedy will be happening under the Heron Restaurant in its Emerald Ballroom in Narrowsburg on Sunday, Sept. 4 at 8 p.m. Comedy Night will feature alumni from “The Tonight Show, Conan, Comedy Central and more.” Not recommended for the humorless or for those under 16.

Above: A ten-foot-tall granite statue of Mariamma at the former ashram in Big Indian on Sunday, July 27. Photos courtesy of the Bodhivastu Foundation.

Two years ago, the long-dormant ashram in Big Indian founded by legendary Catskills guru Swami Rudrananda--known as Rudi—was reborn as the Big Indian Meditation Retreat and Healing Sanctuary. Run by the Bodhivastu Foundation, the new retreat center is dedicating its nine-foot-tall black granite statute of the diety Mariamma on Saturday, Sept. 3. Dignitaries and members of Rudi’s old community will celebrate with fire ceremonies, flower garlands and the display of a sacred cow and calf all day on Friday.

Take a break from workaday reality at the Hudson Valley Resort and Spa in Kerhonkson, where they’re hosting their annual Labor Day Weekend BBQ Bash with all the trad trimmings: bonfire and s’mores, swimming, jacuzzi, golf and mini-golf, face painting and other fun for the kids, who stay for free.

Opus 40 in Saugerties is an iconic stone sculpture the size of a park and a wonderful place to spend Labor Day. This year’s concert, happening Saturday Sept. 3 from 5 p.m. until 7 p.m., features Opus 40 friend and neighbor John Ashton of the Psychedelic Furs performing with his all-star assemblage Satellite Paradiso.

The Woodstock/New Paltz Arts and Crafts Fair, held twice a year at the Ulster County Fairgrounds in New Paltz, is a huge, top-notch juried show with a friendly feel that always offers a good time. The artisans pair very nicely with regional musicians, fine local edibles and good wines. Happening Sept. 3 and 4 from 10 a.m. until 5:30 p.m. and Monday Sept. 5 from 10 a.m. until 4 p.m.

The Emerson Country Stores in Mount Tremper will be celebrating with summer’s end sales and tastings of good things from ImmuneSchein Elixer and Tea Thyme Herb, happening noon until 3 p.m. on Saturday, Sunday and Monday Sept. 3, 4 and 5.

At the Maurice D. Hinchey Catskill Interpretive Center in Mount Tremper, they’ll be celebrating the 2016-2017 installation of work in their Sculpture Garden. The artists will be on hand from 10 a.m. until 1 p.m. on Saturday, Sept. 3 to lead a tour of the juried work being shown on the center’s 60 acres of public grounds.

The Belleayre Music Festival in Highmount wraps up its comeback 2016 season with a splendiferous Triple Bill Finale featuring New Orleans-flavored R&B from Jon Cleary and the Absolute Monster Gentlemen, Youtube sensation Sleepy Man and Woodstock’s own Simi Stone. It’s happening on Saturday, Sept. 3, starting with a pre-party on the deck at 6:30 p.m.

C’mon down to the T.R. Gallo Park on the Rondout waterfront in Kingston on Sunday, Sept. 4 and kick your heels up at the Hooley on the Hudson. Three big stages will be rockin’ with Irish music and entertainment and they’ll have food and drink and vendors aplenty from 11:30 a.m. until 9 p.m.

Up the street at Kingston Point Beach, you can join the dreamers and doers of the Hudson River Sloop Clearwater at the Love Heals Beach Party and Concert, a fundraiser/consciousness raiser to close out the summer season. Enjoy live music, potluck, poetry and a powerful invocation of another world as very possible; fun is on from 2 p.m. through 8 p.m. on Sunday, Sept. 4.

On board the Catskill Mountain Railroad’s “Rock N’ Rails” trains, departing from Kingston on Saturday, Sept. 3, rain fans can enjoy live music by Ben Rounds while they ride a historic rail route.