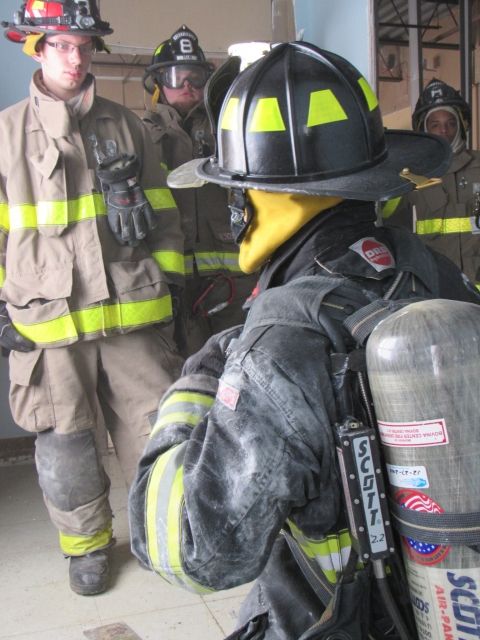 Above: An instructor explains techniques for breaching a wall during an interior fire fight during a drill on Saturday at the former Delaware County Countryside Care Center. Firefighters then practiced on walls in the former nursing home. Photos by Robert Cairns.

A portion of the former Delaware County Countryside Care Center is slated for demolition to make way for the new Delhi Nursing and Rehabilitation Center.

Firefighters from Delhi and nearby communities got to use that space on Saturday, Feb. 27 for training that several described as “once in a lifetime.”

Firefighters from Delhi, Bloomville and Bovina spent much of the day practicing interior firefighting techniques: breaking through walls and searching dark, smoke-filled rooms for victims.

Delhi Fire Chief Daren Evan said that Personal Healthcare LLC, the new owners of the facility, gave the fire department “free reign” in the condemned section of the structure.

“Obviously going through the walls, being able to smoke it up, forcible entry, all that stuff,” he said. “We certainly don't have a building like this every day to do it, so we're very, very lucky.”

Evans said that the drills conducted during the exercise included “all interior operations, using our everyday equipment.”

Above: Firefighters wearing masks and air packs practiced advancing a hose through a smoky building.

In addition to search and rescue techniques, the firefighters practiced advancing a hose line to the point of a theoretical fire. Techniques for ventilating a roof were practiced on a courtyard pavilion at the facility.

“Everything but a real fire,” Evans said.

During the drills, firefighters received instruction in each exercise before entering the building to perform it. They donned masks and air packs to search smoky rooms and used axes and Halligan tools to break through walls.

Assistant Fire Chief Tim Murray received permission to use the building from Jay Walden, the managing partner of Personal Healthcare. Murray said that Walden remembered firefighters using old buildings for training in the Hudson Valley and readily agreed to make the infirmary building available for that purpose on Saturday.

Murray agreed that the opportunity was rare. “We'll never get experience like this again,” he said.

In a written statement, Walden said, “We are really thankful to the entire community for all their support so far. We feel honored to be able to help the fire department conduct such important and useful training and, although we hope they never need to use it, it is comforting to know they have that experience.”

Above: Firefighters kneel down, preparing to crawl into a smoke-filled room to practice searching for a victim.

Murray said that the cooperation of Personal Healthcare and its building contractor, Lachase Construction, was appreciated.

“This generous offer speaks volumes of Personal Healthcare’s commitment to our community and we look forward to our productive partnership well into the future,” he said.

Personal Healthcare plans to operate a 176-bed skilled nursing facility on the site, using the original 1962 building there but demolishing a 1975 addition and replacing it with a new, two-story building of 71,720 square feet.

Above: A firefighter breaks a hole in a wall, preparing to enter the adjoining room.

Countryside Care Center, then under the ownership of Leatherstocking Healthcare LLC, closed in October 2012 after the New York Department of Health cited it for deficiencies in care. Leatherstocking bought the facility from Delaware County in 2006.