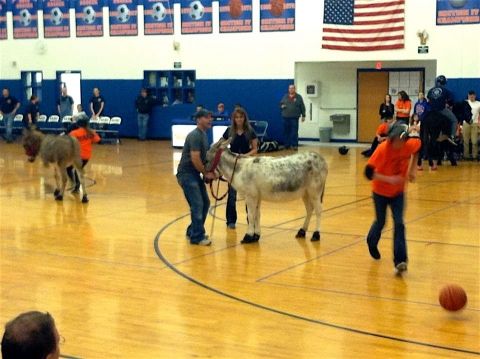 Above: A donkey basketball game at Margaretville Central School in April 2015. Photo by Pauline Liu, via Facebook.

A once-popular fundraiser will not happen at Margaretville Central School this year.

Donkey basketball, which involves students and teachers playing basketball in school gym while mounted on donkeys, was the subject of protests in the Delaware County village of Margaretville last year. This year, no game was planned.

An animal rights group is taking credit for the change, while a school official simply says the event was not scheduled this year.

The notice states that the games are a violation of state education law, Section 809, which states that schools shall provide education “in the humane treatment and protection of animals and the importance of the part they play in the economy of nature as well as the necessity of controlling the proliferation of animals which are subsequently abandoned and caused to suffer extreme cruelty.”

While the law says only that such instruction must be “given in every elementary school under state control or supported wholly or partly by public money of the state,” ALDF says it applies to the donkey basketball fundraiser.

An ALDF news release announcing the discontinuation of the annual game called the law “forward thinking” and claimed that “organizers canceled this year’s event” due to the ALDF's threat of legal action.

Margaretville Central School Superintendent Robert Chakar, who took the top job at the school shortly after last year's donkey basketball game, said that he was aware of the controversy and the threat of a lawsuit. He declined to link the threat with this year's lack of a game, however.

“There wasn't anything scheduled,” he said. “I'm not sure if that was a variable.”

Chakar said that he has not received any feedback about the lack of a donkey basketball game this year. “No one has mentioned anything to me, good or bad,” he said.

She said it was the only such action taken by ALDF in New York state.

“When a government is using taxpayer dollars to promote cruelty to animals, we get involved,” she said.

Blome said that Margaretville's donkey basketball event came to ALDF's attention because of a petition on the website Change.org, which was started by Margaretville residents.

“It alerted us that there was robust opposition on the ground,” she said.

She also said the school does not currently face any legal action from her group.

“Once they decided not to schedule the event, we didn't have a claim, anymore,” she said.