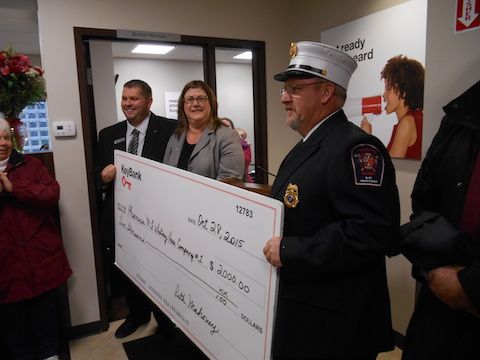 The staff of the KeyBank building that was gutted by fire in the Ulster County hamlet of Phoenicia on February 16 thanked the firefighters who worked through the icy night to save the structure with a $2,000 check at a ribbon-cutting ceremony on Wednesday, Oct. 28.

The bank, which reopened for business last month after extensive repairs, also presented a $500 check to the Phoenicia Business Association.

Above: Larsen and Kahrs present a check to Robin Kirk and David Pillard of the Phoenicia Business Association.

Jacquelyn Kahrs, the area retail leader for KeyBank's Hudson Valley and Metro New York territory, presented the checks along with Charles Larsen, the manager of Phoenicia branch of the bank.

Gary Carr, the fire chief of the Phoenicia M.F. Whitney Hose Company, accepted the check on behalf of his fire company.

Over 100 local firefighters, including companies from Pine Hill, Big Indian, Fleischmanns, Olive, West Hurley and Woodstock, helped the Phoenicia firefighters battle the blaze, which was reportedly caused by an "unspecified electrical event."

Above: Larsen and town of Shandaken supervisor Rob Stanley cut the ribbon at the new Phoenicia branch of KeyBank while Kahr looks on.

Robin Kirk, the owner of the Nest Egg Country Store, and David Pillard, the owner of Tender Land Home, accepted the bank's gift of $500 in their roles as co-presidents of the Phoenicia Business Association.