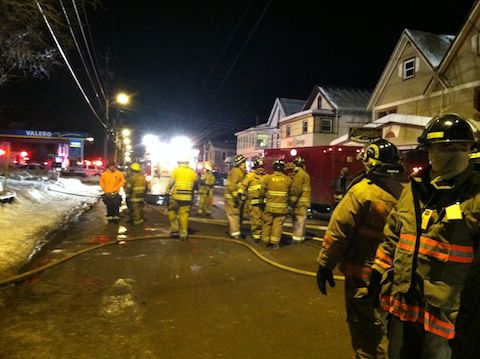 The Key Bank building at 53 Main Street in Phoenicia was destroyed by fire on Monday night, Feb. 16, despite the efforts of about 100 local firefighters who showed up to battle the blaze.

Several local residents called 911 to report the fire around 9:33 p.m., said Phoenicia Fire Chief Gary Carr. The fire was brought under control quickly, and there were no injuries.

Firefighters from Phoenicia, Pine Hill, Big Indian, Fleischmanns, Olive, West Hurley and Woodstock companies responded to the fire, along with the Shandaken Ambulance Service and a Mobile Life support team.

For Carr and his crew, this was the second large fire in the past week. On Friday, Feb. 13, the company responded to a structure fire on West Street.

On the scene, Carr said that the building appeared to be a total loss, but the next day, Tuesday, Feb. 17, he said that the damage was not as bad as it had appeared in the dark.

"After looking at it again this morning, structurally, to me, it looks fine," he said. "There’s a few rafters that are burnt, and some of the ceiling joists, but it’s definitely buildable."

The contents of the building were destroyed, but the safe, in which the bank's deposits were stored, appeared to be intact, Carr said.

"There was no compromise of the safe at all," Carr said.

Multiple officials at Key Bank did not immediately return calls for comment, but the town of Shandaken posted a message on its Facebook page saying its clerk, Joyce Grant, had received an official statement from the bank:

The cause of the fire is still unknown. As of around 11:30 p.m. on Monday night, Ulster County fire investigators were inspecting the charred interior of the building, trying to determine what sparked the blaze. They are returning to inspect the building in daylight on Tuesday, Feb. 17, Carr said.

Above: Ice gathered on a hydrant across the street from the Key Bank fire.

Temperatures were in the single digits on Monday night, and the bitter cold quickly left pavement, equipment and firefighters alike coated in ice.

In recent days, the frigid temperatures have affected Phoenicia's water system, freezing a water main and forcing the water district to switch to a backup system. Some parts of the Phoenicia water district were without water on Monday, while others were under a boil-water alert.

But the water district's issues didn't slow down firefighters, who were able to tap into a hydrant immediately across the street from the building.

Margarete Nolte, proprietor of the Phoenicia Delicatessen, was among several Phoenicia residents who reported the fire. The delicatessen is across the street from the Key Bank, and Nolte lives above the shop.

"The whole town was full of smoke," she said. "I just couldn't believe it."

Above: Staff at the Phoenicia Library, recently rebuilt after a 2011 fire, react to the news of yet another fire on Phoenicia's Main Street.

By around 11:30 p.m., with the fire under control, Nolte had opened her shop and begun making coffee for the dozens of firefighters and first responders on the scene.

"I know how cold it is out there," she said.

Below: The Key Bank building after the fire was brought under control. The building still stands, but the interior is badly charred. 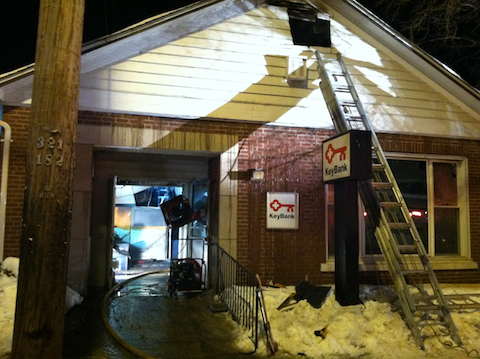