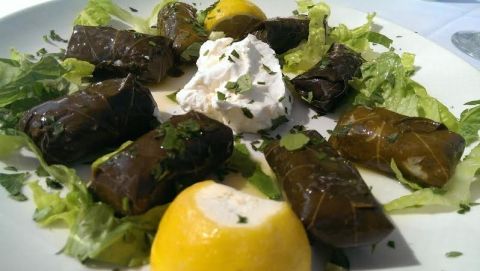 “I just stared and said ‘Oh, that’s my restaurant.’ This is my dream,” said Paula Douralas, proprietor and chef of Petra Estiatorio, the Greek restaurant that opened at Shephard Hills Golf Club over the Fourth of July weekend.

Last winter, Douralas visited Shephard Hills, and fell in love. Something about driving up the winding road on a pristine wintery day to the stone restaurant clubhouse took her breath away.

“I was shocked and couldn’t help looking at it. It was all white with snow. I was in paradise.”

The route Douralas took to arrive at Shephard Hills was just as full of twists and turns. Born in Greece, she came to the U.S. at age 7 with her parents who settled in Stamford, Conn.

The recipes she uses were those passed down from her Greek grandmother. Ingredients were never measured, but always just right.

“My mother said ‘God gave you a brain and eyes to use.’ My hand, this is my scale,” she said.

Douralas moved to New York City in the 1980s where she was co-owner of a restaurant in Times Square for 12 years. Later, for five years, she operated a small “taverna,” Santorini Grill, in Brooklyn's Williamsburg neighborhood. The restaurant's experimental "pay what you want" policy drew press and accolades. TV shows like "Blue Bloods" and "The Good Wife" hired her to cater staff meals and parties.

One of her regulars was artist Brian Tolle, who created the ground-breaking Irish Hunger Memorial in Battery Park City.

“We were there nearly every day, the food was so good,” said Tolle, who had a studio nearby. “Paula would call and say ‘I have shrimp today.’ We’d just go and eat what she made. Never looked at a menu.”

But with the restaurant’s success and the growing trendiness of the neighborhood, rent prices skyrocketed. Douralas closed her doors two years ago. Around the same time, Tolle said, he was forced to leave his studio when his rent escalated from $2,500 to $25,000 a month.

Douralas sunk into a mild depression. Tolle retreated to his weekend home near Fleischmanns. He began spending more time upstate, and even got his parents to buy a house nearby.

“I needed a big space, high ceilings for a studio,” said Tolle whose large-scale sculptures and installations often have a historical context. He bought the former Catholic Church in Roxbury last summer. Renamed the Roxbury Abbey, the space is now a modern art studio.

To celebrate, he threw a party and asked his close friend to cater.

“Paula was the hit of the party,” he said. “Everyone was asking her to open a restaurant.”

Over the fall and winter, Douralas frequently visited, fell in love with the area, and started asking around about restaurant opportunities. That’s when networking paid off. Tolle talked with his friends Greg Henderson and Joseph Massa, proprietors of the Roxbury Motel, who made the connection to Shephard Hills. And Petra – meaning "stone" in Greek – was born.

“The house is stone. Petra is the rock. St. Peter is the rock of the Church. He was a shepherd,” she said, bringing all full circle.

The restaurant went through a complete overhaul. Tolle’s friend, noted interior designer Eric Lysdahl, who has a house in Delhi, redid the look in comfortable, crisp whites, tan and black. The stone-walled dining rooms echo the restaurant’s name. Al fresco dining on the slate patio under large beige umbrellas gives the spot a European flair.

Douralas ditched the kitchen’s small grill for a larger one, so she’d have plenty of room to cook seafood and meats separately. She and her partner Kostas Tzanos set to work designing the menu, lining up vendors and hiring staff.

Sharing the kitchen with her is line chef Nikos, who owned a restaurant in Rockland County for 25 years.

“He’s my right and left hand,” she said.

The three menus – lunch, golf and dinner (there’s one for kids too) – are decidedly Greek. Mainstays include colorful horiatiki ($12), a traditional salad of red onions, tomatoes, feta, capers and Kalamata olives. Stuffed grape leaves with zesty goat cheese and calamari – fried or grilled, and served with a fresh-made marinara sauce – also top the list.

“Water is very important,” Douralas said. “I cook with water, and the water here is so pure. Delicious.”

Douralas personally selects the meats from a butcher and uses only the freshest tomatoes in her sauce. Oregano comes from Crete.

Another key ingredient is sourced a little closer to home: milk from a dairy herd just south of Roxbury, on Route 30.

“Every time I pass the cows, I say hi. They are my girls,” she said. Douralas arranged with the farmer to buy their milk to make fresh Greek yogurt.

Since its opening weekend, the restaurant has earned a warm welcome from guests.

“Customers are raving about the grilled octopus,” said Tzanos. “It’s so tender and meaty.”

During the warmer months, the menu features seafood and vegetables along with lamb chops, moussaka and pork souvlaki. Come the fall and winter, Douralas will cook up her favorite family soups and stews.

“Being here makes me so happy,” she said. “I love to cook. This is my home and these are my guests.”

Petra, 562 Shepard Hill Road, Roxbury, is open for lunch and dinner seven days a week, 11 am to 11 pm. Reservations on weekends are recommended, 607-326-6030. For now, the restaurant is BYOB; an application is in for a new liquor license. For more information, see Petra Estiatorio's Facebook page.