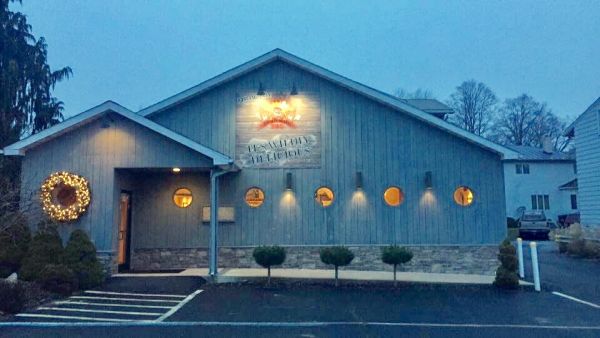 The Kansas City-style barbecue restaurant had a brief three-month residence in Phoenicia before catching fire in February of 2016. Nine months later, on December 7, the business was born again on the outskirts of Kingston in Lake Katrine.

Buley would rather not speak about the fire itself. Instead, she told the story of a new beginning in the space that was known as Fred's Place for 30 years.

Through a series of serendipitous family connections, Buley caught wind that the former owners, Fred and Cynthia Wadnola, had the building up for lease.

"It was turn-key ready," said Buley. "We just needed to build the smoker and change the decor to Western."

All of the restaurant equipment from Fred's Place was included in the lease. This was the break Buley needed. Since graduating from the Culinary Institute in 1986, she had been collecting equipment.

"I lost it all in the fire," said Buley, her one mention of that fateful February day.

Buley's new landlords have been kind, she said. "They made it possible for me to start over."

Buley is passionate about bringing authentic barbecue to the area. After graduating, she spent two years traveling the country to study charcuterie and BBQ. Inspired by her visits to multiple states, including Kansas, Texas, Tennessee and Florida, Buley settled on bringing Kansas City-style barbecue to the Catskills.

Smokin Boars BBQ is quickly becoming known for their hand-pulled pork that has been smoked for hours, piled high and topped with their signature barbecue sauce. There is a Texas-style beef brisket, house-smoked and hand-carved. Both are available as platters or sandwiches.

The menu also boasts a certified Angus strip steak, marinated and char-broiled. The St. Louis ribs are a crowd favorite, adorned with a 26-spice dry rub then glazed with barbecue sauce. Grilled chicken or all-white-meat turkey burgers are available for anyone looking for a lighter option.

Buley has not let the fire define her. With Travis, her son and "right hand man" by her side, she is moving forward, bringing good food and music to her neighbors in Lake Katrine. There is a temporary liquor license in place. Plans are in the works for a summertime parking lot barbecue picnic and lots of local music.

Buley encouraged all to bring their appetite.

"We will be passing out food all night long," she said.