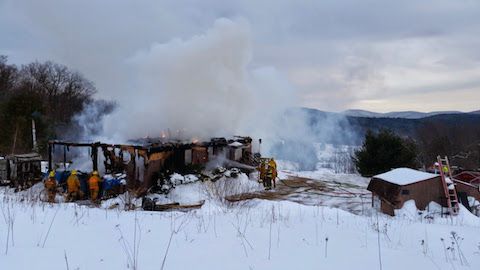 Above: Firefighters battle a structure fire on White Road in the town of Middletown on Feb. 4. Photos by Julia Reischel.

A house at 410 White Road in the Delaware County town of Middletown burned on the afternoon of Wednesday, Feb. 4.

Alice and Anthony Curley, who have rented the house for several years, were out at a doctor's appointment on Wednesday afternoon when the blaze began, said Janine Miller, Alice's daughter.

"They were only gone for two hours or three hours," Miller said.

Gene Rosa, the Chief of the Margaretville Fire Department, said that the Delaware County Cause & Origin team has ruled that the blaze was "an accidental fire having to do with the heating system."

The house had two heating systems, a propane furnace inside the house and a wood fired hot air furnace outside the house. (In a previous version of this story, I referred to this outdoor furnace as an outdoor wood boiler, which it is not. "It's a hot air furnace," Rosa said. "It's kind of unique.")

It is unclear which heating system started the fire, Rosa said.

A neighbor saw black smoke rising from the house around 2:45 p.m. and called 911. First responders arrived at the house, which sits at the top of a rise on White Road, off of Bull Run Road near the village of Margaretville, to find a fully engaged fire around 3 p.m.

Ammunition inside the home was set off by the blaze, popping loudly as firefighters doused the fire with water from tanker trucks. Ash covered the snow surrounding the home.

By 4 p.m., the fire appeared to be under control, with most of the structure destroyed.

Rosa said that the fire probably began soon after the couple left the house at 1 p.m. and burned for hours without anyone noticing.

"The structure was fully involved before anyone even noticed it was burning," Rosa said. "When the first firemen arrived on the scene, the fire was already through the roof. There's nothing to save at that point."

Two dogs, a beagle-basset hound mix named Zeus and a puppy named Nanook, were in the home at the time of the fire. They are still missing and likely perished in the fire, Miller said.

Rosa confirmed that the two dogs had likely died in the fire, probably of smoke inhalation. Their bodies had not yet been recovered.

"My guess is that the dogs would have died of smoke inhalation before they would have suffered any kind of burns," Rosa said. "They'd go to sleep and that’s the end of it, as would happen with carbon monoxide poisoning."

The Curleys are staying in temporary housing in Arkville. All of their possessions have been destroyed, Miller said. She has created a GoFundMe fundraising page to accept donations. (Click the link at the bottom of this story to donate.) Local businesses are also making donations to help the family; Adams Fairacre Farms in Kingston has donated a $100 gift card, she said. A fundraiser is also in the works at Margaretville Hospital, where Alice Curley works.

On Friday, Feb. 6, Alice Curley asked the Watershed Post to thank the community for its support:

"My husband and I are both grateful and amazed at the community that has gathered for us, and that has donated clothes, linens and money," she said in a voicemail. "We are so appreciative, nut just for the things, but for the hugs and the love and the concern. We are so grateful to have this community in this time in our life. Thank you. That home was our world, and our dogs are our babies, so thank you. Thank you so much for the care you have given."

Above: Ash from the fire coated fresh snow next to the blaze.

Above: An outdoor wood fired hot air furnace, left, near the main structure.

Above: Smoke from the blaze filled the valley.

Above: The structure appeared to be a total loss.

Above: Ammunition inside the house could be heard popping as it exploded in the blaze.

Correction: The first version of this story gave an incorrect address for the house.

Update: There will be a fundraiser for the Curley family on Feb. 21 at 5 p.m. at the Arkville Fire Hall.

This story has been updated with multiple times with new information.

Below: A fundraising page for the Curley family.