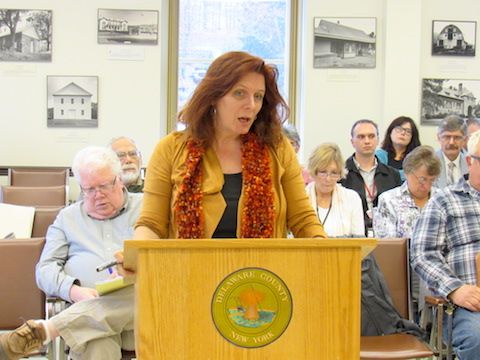 Above: Leigh Melander, owner of a lodge in Fleischmanns, argued against a proposed bed tax during a public hearing on Oct. 28. Photo by Robert Cairns.

After a run-up of weeks and a public hearing held on Wednesday, Oct. 28, the Delaware County Board of Supervisors withdrew a local law that would have created a two percent tax on hotel and motel occupancy.

As the resolution to adopt the tax came up on the agenda at the Wednesday, Oct. 28 meeting of the board, Stamford Supervisor Mike Triolo, who chairs the board's economic development committee, withdrew it.

“There are some substantive changes we'd like to make to it,” he said.

Triolo said that comments received at the pubic hearing, as well as at three previous informational meetings, led his committee to change the language in the law so that it will apply not only to traditional hotels, motels and bed-and-breakfast businesses, but also to vacation rentals booked through online services such as AirBnB and casual rentals advertised through services such as Craigslist.

The law will also be revised to say that the tax will not apply to campgrounds. The previous version would have taxed stays at privately-owned campgrounds, but could not have been applied to those operated by the New York State Department of Environmental Conservation.

He said that a “specific change” could make the law effective for any vacation rental, except campgrounds.

After the meeting, Nealis told the Watershed Post that the specific change was the removal of a clause that said that the law applied to establishments with maid service or other traditional amenities.

Nealis said that he reached that conclusion after “long conversations” with officials in Otsego and Sullivan counties, which have long had bed taxes. He said that the change would make the law more fair and that the other counties had successfully collected the tax, even from the more casual rentals.

Triolo said that the law will be brought up again at the board's Nov. 10 meeting, with another public hearing scheduled for Nov. 24.

Despite the issue being removed from their agenda, board members continued to discuss the bed tax.

Hamden Supervisor Wayne Marshfield asked if it is known how many lodging establishments exist in the county.

Andes Supervisor Martin Donnelly complained that the Delaware County Chamber of Commerce, the county's tourism promotion agency, did not survey lodging business owners to gauge support for the law.

“It still seems to be a sore spot of contention that the chamber of commerce is not representing these businesses,” Donnelly said.

Nealis noted that three public meetings were held in different areas of the county to gather input.

“You can say it was a good faith effort, or useless, but we tried to reach out to these people,” he said.

“I was disappointed that there wasn't more participation from these businesses,” said Roxbury Supervisor Tom Hynes.

Colchester Supervisor Art Merrill said that the business owners may have stayed away because they assumed that the bed tax “was a foregone conclusion” or because the times of the meetings were not convenient.

Only three people spoke at the public hearing held just prior to the meeting.

Leland Ploutz, the owner of the Octagon Motor Lodge in Hamden, said, “I think this is an unfair tax being leveled on just the hospitality industry.”

He complained that rooms listed through AirBnB and Craigslist would not be taxed and said, “I think we're being discriminated against.”

Leigh Melander, owner of Spillian, a lodge in Fleischmanns, said that the tax “puts a big burden on a very small part of our industry.”

She also said that the number of lodging businesses in the county is not really known.

“I wonder why there has not been a process where the lodging industry has been properly asked about this,” Melander said.

Melander called projections of $192,000 in revenue from the tax “a fantasy,” but Triolo countered later in the meeting that the figure comes directly from the state, which already charges a sales tax on lodging as well as other businesses.

Finally, Melander asked the board to “meet us halfway” by matching bed tax revenue with other money from county coffers to promote tourism.

Later in the meeting, Middletown Supervisor Marge Miller responded to that idea.

“In general, one dollar invested in tourism beings seven dollars into the county,” Miller said. “To raise sales tax on everyone else is punitive to the locals.”

Carol Adams, the owner of the Roxbury Waterfall House, an AirBnB rental, said that the bed tax unfairly targeted tourists.

“Our tourists are very valuable,” Adams said. “You act like this is just some place we can pick an apple off a tree and get money. We have to take care of our tourists. We shouldn't be taxing them.”

Under the proposal, money raised by the bed tax would be dedicated to tourism promotion and would not be available for other uses. Decisions on spending would be made by a board consisting of the economic development director, two members of the board of supervisors and four representatives of tourism-related businesses. At least two of those representatives would come from lodging businesses.