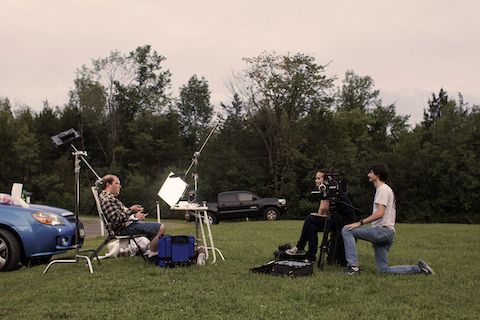 Above: Director Tansy Michaud and cinematographer Adam Carboni shoot “Enjoy Your Intermission," a film about the Hi-Way Drive-In Theatre in the Greene County town of Coxsackie, in 2014. Photo by Philip Doueihi.

Officials have spent years trying to build up the Catskill region's appeal to the film industry. Now new legislation might make things a whole lot easier.

The Hudson Valley Film Commission announced on Thursday, June 16 that state lawmakers have passed legislation this week that will extend tax credits for film productions to 12 upstate New York counties, including Greene, Sullivan and Ulster counties in the Catskills.

The new legislation increases the credit on labor costs to 40 percent for 12 upstate counties, including the three in the Catskills.

Although the Catskills have played host to such films as the 2005 Tom Cruise vehicle “War of the Worlds” and Martin Scorsese’s “Kundun,” the region has struggled to compete with more attractive (and cheaper) filming locations in the United States and Canada, according to Hudson Valley Film Commission director Laurent Rejto.

"These additional tax credits will allow the Mid-Hudson Valley region to compete on a level playing field for billions of dollars in film and TV production revenue,” Rejto said in a statement issued by the Hudson Valley Film Commission on Thursday.

Administered by Empire State Development, the New York State Film Tax Credit Program was first established in 2004 to increase the film and television production and post-production industry presence in the state.

As part of a state-mandated third-party review of the program, Camoin Associates released a 30-page report in 2015 that found the overall program had "created over $5.1 billion in spending in New York State over the two-year period of 2013 and 2014."

Furthermore, the report found that the film-related spending resulted in $3.3 billion in earnings, 60,907 jobs created and over $9.8 billion in total spending throughout the state economy in those two years.

Ulster County Executive Mike Hein, who mentioned the passage of the extra upstate film tax credits in his 2016 State of the County address, stated in an email to the press, "Today is an important day for Ulster County and our creative economy."

Hein described Ulster County as a home to countless actors and directors.

"By including Ulster County as an eligible county, this amendment will help our creative economy thrive,” he said.

The legislation was co-sponsored in the New York State Senate by Sen. George Amedore and Sen. John Bonacic, and in the State Assembly by Assemblywoman Aileen Gunter and Assemblyman Frank Skartados, all of whom represent portions of the Catskills and Hudson Valley regions.