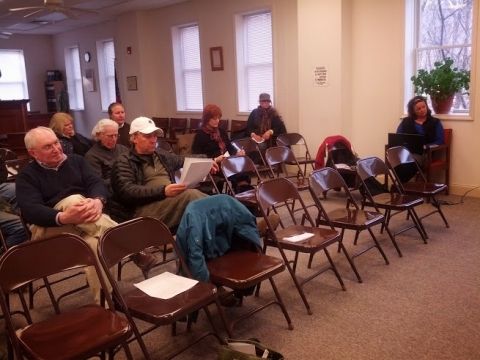 Above: Business owners discuss a proposed bed tax for Delaware County at a public meeting in Arkville on March 25, 2014. Photo by Julia Reischel.

The Delaware County Board of Supervisors took the first step towards levying a two percent tax on room and hotel rentals in Delaware County at a meeting on Wednesday, April 23.

Seventeen of 19 town supervisors voted to approve a resolution requesting authorization from the New York State Legislature to impose the tax, known as a bed tax or an occupancy tax. The tax, according to the text of the resolution, would "provide a dedicated funding stream to promote and develop the tourism industry in Delaware County." (The resolution is embedded at the bottom of this story.)

"Yeehaw!" said Jim Thomson, Delaware County's tourism director, when asked to comment on the vote. Thomson has been promoting the idea of a bed tax to boost tourism revenue for over a year.

The two town supervisors who opposed the bed tax resolution were Arthur Merrill of Colchester and Dennis Valente of Davenport.

Wednesday's vote was only the first step towards establishing a bed tax. If the county receives permission from the state legislature and the governor to levy such a tax, the county Board of Supervisors will draft a local law and hold public hearings to discuss it.

If the bed tax law passes, he said, "we will ramp up our tourism promotion efforts."

"There's lots of media buys that we can't take advantage of now -- we simply have to pass on them because of our budget issues," he said. "This will give us freedom to better promote the Delaware County tourism industry as a whole."

Not everyone is so excited about the bed tax. Several business owners who attended a public meeting in Arkville on March 25 about the proposed bed tax were skeptical.

"Once we sign on, there is no turning back," said Peter Molnar, the owner of the Margaretville Mountain Inn in Margaretville.

"I see growth every year in my business," said Benjamin Fenton, the owner of the River Run Bed & Breakfast in Fleischmanns. "I'm not like, 'Whoa, I need the county to help me out.'"

Others worried that Delaware County would divert some of the tax revenue to the county's general fund instead of funding tourism specifically. In Ulster County, only 15 percent of the two percent occupancy tax is used to fund county tourism promotion, according to Rick Remsnyder, Ulster County's tourism director.

"Why don't we go after the numerous homes that are being rented without paying any taxes at all," asked one business owner at the March 25 meeting who did not give his name.

Catskills homeowners rent their homes privately through national websites like Airbnb.com and VRBO.com and local vacation rental companies. While some private vacation rental owners pay sales tax, there is little enforcement to ensure that they do so.

Phyllis Frome, the co-owner of Pine Hollow Lodging, a Catskills-based rental agency, said at the March 25 meeting that she wants her clients to comply with a bed tax law. She added that she encourages homeowners to pay sales tax as well.

"We collect sales tax from every renter," she said. "[Our clients] want to be paying their taxes, and I hope they are."

County officials at the March 25 meeting said that they would do their best to address the concerns of the Catskills lodging industry as they draft the bed tax law.

Thomson said that the law would not allow funds to be diverted to other uses.

"The state will not approve any bed tax laws now that are not dedicated to tourism," Thomson said.

The resolution passed this week by the board of supervisors specifies that the funds from the bed tax be dedicated to tourism.

Glenn Nealis, Delaware County's Director of Economic Development, and Marge Miller, the supervisor of the Town of Middletown, said that a county bed tax law would apply to private vacation rentals.

They added that a portion of the funds raised through the bed tax could be dedicated to enforcement: making sure that private rentals pay both sales and occupancy taxes.

"Someone will be dedicated to ensure compliance on websites," Miller said.

Miller added that she wanted to ensure that the lodging industry is represented in how the money is spent.

"If we're going to do it, we'll research it fully and do it right," she said.

Why a bed tax?

County officials argued in March that Delaware County needs to increase spending on tourism because it is one of the few industries in the region.

Under the terms of a 1997 Memorandum of Agreement with New York City to protect the watershed, half of the land in Delaware County cannot be developed, Thomson said.

"That leaves you two choices: farming and tourism," he said. "Dairy farming is dead, so that leaves tourism."

Most of Delaware County's neighbors have bed taxes. Ulster, Sullivan, Broome, Otsego and Schoharie counties have occupancy taxes that range from two percent to five percent. Greene and Chenango counties do not.

According to a handout passed out at the March meeting, Delaware County's $95,000 tourism budget is dwarfed by the tourism budgets of several of its neighbors: $800,000 per year in Sullivan County and $950,000 a year in Ulster and Greene counties.

A bed tax on tourists -- a tax that is not directly levied on county residents -- is the only way the Delaware County Board of Supervisors will consider spending more money on tourism, officials at the March meeting said.

Delaware's $95,000 tourism budget is "stuck in concrete," said Michael Triolo, the town supervisor of Stamford who sits on the Delaware County Board of Supervisors Finance Committee.

"We are an anti-tax county, in general," said Miller, the Middletown town supervisor.

"If you think there is wholehearted support for tourism in Delaware County, you're kidding yourself," said Nealis.

Supervisors Triolo and Miller both voted to approve the bed tax resolution this week.

Reporter Julia Reischel sits on the board of the Delaware County Chamber of Commerce, which is the designated tourism promotion agency for Delaware County. She has abstained from voting on the bed tax issue in board meetings. Delaware County Tourism is also a Watershed Post advertiser.