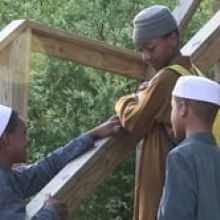 Above: "Islamberg: A Muslim Community in the Catskills." A video produced by Jessica Vecchione of Vecc Videography in partnership with the Watershed Post. We take a look at how the small religious community of Islamberg has dealt with threats from people like Robert Doggart, a Tennessee man who plotted to burn the hamlet and massacre its citizens in April 2015. Help us do more reporting like this: donate.

For the second time this year, an armed man has threatened to drive across the country to the Catskills to attack Islamberg, a community of about 25 African-American Muslim families located in the rural Delaware County town of Tompkins.

Rumors that the community is a breeding ground for homegrown terrorists have made Islamberg a target for anti-Muslim extremists around the United States.

Above: Jon Ritzheimer brandishing a gun in a Facebook video in which he says he is driving to Islamberg on Nov. 18.

On Nov. 18, Jon Ritzheimer, an ex-Marine from Phoenix, Arizona, posted a video on Facebook of himself with a handgun in the front of a car, saying that he is on his way to Islamberg.

Ritzheimer says that he is planning to “see those assholes who called me a fucking terrorist.”

In June, Islamberg and its parent organization, The Muslims of America (TMOA), ran an article in their newspaper, The Islamic Post, calling Ritzheimer a member of “The American Taliban."

Ritzheimer has made himself famous this year for organizing a protest outside a Phoenix mosque in May and for posting numerous anti-Muslim Facebook videos, including one in which he shoots a Quoran with an automatic weapon.

Ritzbehimer also posted Islamberg’s address on his Facebook page along with an invitation to “any northeast patriots” to join him in visiting the community, which is home to dozens of children, college students and professionals who commute to work as doctors and lawyers in the nearby city of Binghamton.

The threat followed a familiar pattern: In April, a Tennessee man named Robert Doggart was arrested after hatching an elaborate plan to drive to Islamberg, burn down its buildings and massacre its inhabitants. Doggart is currently awaiting trial, scheduled for early next year.

Ritzheimer deleted the video soon after posting it. Currently, his whereabouts are unclear, according to Tahirah Amatul-Wadud, one of the lawyers who represents The Muslims of America.

“We don’t really know where he is, but law enforcement seems to think that he really has backed down since November 20,” she said. “Nothing on Facebook indicates that he is still coming to New York.”

Residents of Islamberg discovered Ritzheimer’s video on Nov. 18 and notified the FBI, which in turn notified the New York State Police and local law enforcement in the Catskills this week, she said.

“We contacted the FBI, and then the FBI contacted the different local and state law enforcement officials,” she said. “They were telling us that they basically knew where he was, and that he’s not going to make it to New York, and that they were all on alert.”

Paul Holstein, the media representative for the Albany Field Office of the FBI, released a statement today explaining the FBI’s response to Ritzheimer’s video:

The FBI vigorously investigates threats and allegations of hate crimes.  After recently becoming aware of a video which could have been perceived as threatening against the Muslim community in Hancock, NY, the FBI immediately took steps to notify our federal, state and local partners.  The FBI and New York State Police have maintained communication with the community to keep them informed of pertinent information.  As always, we remain committed to protecting the civil liberties of Americans and make every effort to preserve their safety.

According to an article in the New York Daily News published on Friday, Nov. 27, the FBI has issued a formal alert calling Ritzheimer a “potential threat to law enforcement.” An FBI spokesperson in Albany would not confirm that such an alert had been released.

In April, when news of Doggart’s threat broke, members of the Islamberg community, many of whom also live in the nearby city of Binghamton, sheltered together on their compound. This time, according to Amatul-Wadud, many residents are out of town thanks to yesterday's Thanksgiving holiday.

“We’re not sheltering in place, especially because it was Thanksgiving,” she said. “A lot of people went to family. It was really quiet up on the land.”

Ritzheimer’s threat came the same week that the The Muslims of America hosted a conference in Albany on the topic of Islamophobia. Much of the conference was devoted to discussing violent threats received by TMOA communities around the country and by Muslims in general.

The mood at the conference was solemn. The gathering, which had been scheduled for Nov. 14 for months, occurred one day after violent extremists affiliated with the Islamic State, also known as ISIS, killed 130 people in a series of coordinated attacks in Paris.

In Albany, the conference attendees braced for backlash against Muslims in the wake of the Paris attack even as they honored the victims and denounced ISIS.

“We are here to expose and shed light on those who continue to kill the innocent—men, women and children—indiscriminately,” said Hussein Adams, the CEO of the Muslims of America, in a speech opening the conference. “Islam is a religion of peace. Islam is not a terrorist religion. … This ISIS, this created organization was brought about to tarnish, to attack, to destroy the good name of Islam and to bring about a bad name for Muslims."

Above: The International Islamophobia Conference, held on Saturday, Nov. 14 in Albany, featured a poster of public figures, inluding Jon Ritzheimer, whom The Muslims of America refer to as the "American Taliban." Photo by Julia Reischel.

At the conference, Ritzheimer and Doggart were both listed on a poster labelled “American Taliban.” TMOA officials said that the two men were part of a loosely-organized group of anti-Muslim extremists who communicate through the internet and encourage each other to incite violence against Muslims.

“The moniker American Taliban is what we give to American domestic right wing extremists who personify the behavior of the Taliban like those in Peshawar Pakistan who burn schools and kill children,” said Muhammad Matthew Gardner, a TMOA spokesman, in a press release issued by TMOA last week. “Ritzheimer fits the bill by virtue of his orchestrated armed Mosque protests and inciting hate against Muslims.”

Amatul-Wadud said that what really worries her isn't Ritzheimer himself; it's the large response to his rhetoric on social media.

Correction: Ritzheimer published his video on Nov. 18, not Oct. 18, as a previous version of this article stated.