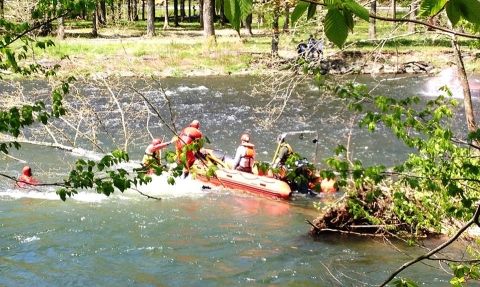 It's not even Memorial Day yet, and it's already begun: The season for reminding boaters that placid-looking local rivers and creeks can pack a deadly wallop.

Local firefighters got a chance to put their swift water rescue training into action on Tuesday around 11 a.m., when Downsville and Walton first responder crews were called to the scene of a capsized boat on the East Branch of the Delaware River near Corbett, in the Delaware County town of Colchester.

Three people had gone out fishing in a rowboat and got stranded on a small island in the middle of the river when their boat flipped over, said Steve Hood, director of the Delaware County Department of Emergency Services. Luckily for the trio, someone who lived nearby heard them yelling for help and called 911.

"They were lucky enough to get to that island," Hood said. "They did not have life vests on."

At least one of the three could not swim because of health issues, Hood said. The river was running unusually high and fast, he said, because of spillover from the Pepacton Reservoir.

All three of the boaters were successfully rescued, with the aid of rescue boats from the Downsville and Walton fire departments. Local, state and New York City reservoir police also responded to the scene.

When the water is running high, local rivers can be deadly, even to experienced swimmers. In the summer of 2013, a 21-year-old kayaker drowned in the West Branch near Delhi. Tuesday's rescue on the East Branch could have had a far more tragic result, Hood said.

"This one had a good outcome. Unfortunately, usually they don't," Hood said. "When it's in high, swiftly-moving water, it's usually not so good of an outcome as yesterday."