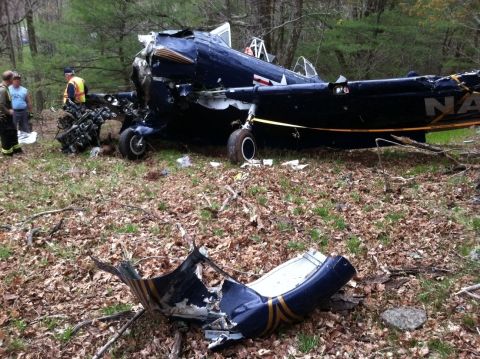 Above: A WWII plane that crash-landed at the edge of a field on North Montgomery Hollow Road in Roxbury on Friday. Photo by Lissa Harris.

A small airplane with a single occupant crashed on North Montgomery Hollow Road near Hubbell Corners, in the Delaware County town of Roxbury, around 12:30 p.m. today. The pilot was injured in the crash.

Just before the crash, the plane had been circling downtown Roxbury, according to eyewitness Jill Ribich, a Roxbury resident and local photographer who was on the scene minutes after the plane crashed. Ribich said she thought the pilot may have been aiming for a small grassy landing strip nearby, but was unable to make the landing.

"I was coming up Route 30, and he was circling the town. He was banking so fast," she said. "We do aerial photography. I knew he was going to go down."

Above: A damaged tree with metal from the crash embedded in it, a few yards away from where the plane came to rest. Photo by Lissa Harris.

The plane clipped a power line and struck several trees on its way down, Ribich said. It came to rest in a wooded area, at the edge of a field. Near the crash site, pieces of wreckage and damaged trees surrounded the downed plane.

The pilot was taken from the scene with a head injury, but survived the crash, said Ribich.

Above: First responders load the pilot onto a medivac helicopter. Photographer Jill Ribich of Catskill Images says the pilot was alert and communicating with medical personnel. Photo reproduced by permission.

State police at the scene declined to speak to the Watershed Post, but said they would be issuing a press release about the crash.

According to FAA records, the plane -- with tail number N164EW -- is a 1943 AT-6C Texan, an aircraft made by North American Aviation and used to train pilots during World War II.

Above: A logo on the fuselage of the downed plane reads "Pratt & Whitney Aircraft: Dependable Engines." Photo by Lissa Harris.

A dispatcher from the Delaware County Department of Emergency Services told the Watershed Post that emergency responders received word of the crash shortly before 12:46 p.m. Several local fire departments and other first responders were at the scene.

Above: The wreckage of the plane's engine. Photo by Lissa Harris.

Update, 5/12/14, 10 a.m.: Pilot James Leavelle has been released from Bassett Hospital, where he was taken after the crash, according to a hospital spokesperson.

Sergeant Gary Leahy of the New York State Police at Oneonta gave the Watershed Post some more detail on the crash. Leahy said that the pilot tried to land on a small airstrip on South Montgomery Road, but was going too fast to stop, and attempted to get airborne again for another attempt. While accellerating upward, the plane struck a power line and several trees, lost altitude and crashed off North Montgomery Road.

2:15 p.m.: The New York State Police have issued a press release about the incident.

Editor's note, 5/10/14, 12pm: I have removed a photo that was posted in an earlier version of this story, which showed blood from the pilot's injury on the outside of the plane. I posted it because it helped tell the story of what happened in the crash. Had the pilot not survived the crash, I would not have run the photo in the first place.

Several readers, including Roxbury Fire Chief Allen Hinkley, were upset and offended by the photo, so we have taken it down. It was not my intention to sensationalize.

3pm: We have also added a photo taken by Jill Ribich before I arrived on the scene, which shows the pilot being evacuated by a medical helicopter. Ribich said he was alert and communicating when the photo was taken. --LH