Above: A couple of Cobleskill firefighters suited up for an ice rescue drill in the town of Summit on Saturday, Jan. 25. Photos by Sandra-Lynn White VanValkenburgh; reproduced with permission from Schoharie County Fire Wire & News.

If you fell through thin ice, could your local first responders save you?

With weather like the Catskills has been having lately, it's not a bad idea for local firefighters and EMTs to have experience with ice rescues. Over the weekend, volunteers from several Schoharie County fire departments and other first-responder agencies got the chance to do some hands-on simulation of an ice rescue, hosted by the Summit Fire Department.

The weekend event was the first cold-water drill of its size in the area, said John Shaw, a firefighter at the Middleburgh Fire Department who helped set up the training session.

"Summit and Middleburgh fire departments have a growing working relationship with water-related emergencies," Shaw wrote in an email. "This year, Chief Clarke of Summit wanted to expand it to bring first responders from around the county together to experience what it takes and what has to happen on these unique calls."

Cold-water rescues aren't all that uncommon in the area, Shaw said. Last month, he said, the Middleburgh Fire Department responded to two calls in two weeks that involved cars in water in subzero temperatures. On one of the calls, a firefighter had to go into the water to cut a victim free.

In nearby Delaware County, three people died in two separate drowning incidents in late December of 2013, after falling through ice while out walking.

During the drill in Summit, participants took turns being the "victim" and the "rescuer," wearing special insulated suits to protect them from the frigid water.

"You're nice and toasty in the suits," Shaw wrote. "Keeps body heat in, water out."

On hand for the drill, Shaw said, were Summit Fire and Rescue; Middleburgh, Jefferson, Richmondville, Cobleskill, Sharon Springs and Hunterland Fire Departments; members of the Schoharie County Search and Rescue Team; officers from the Schoharie County Sheriff's Office; and county paramedics. Participants also got training in pulling a county-owned sled that rescuers can tow with a snowmobile or ATV, used for rescues in remote locations.

Below: Firefighters using a Rapid Deployment Craft (RDC) to rescue a "victim" at the Summit training. For more of VanValkenburgh's photos from the day, see Schoharie County Fire Wire and News's photoset on Facebook. 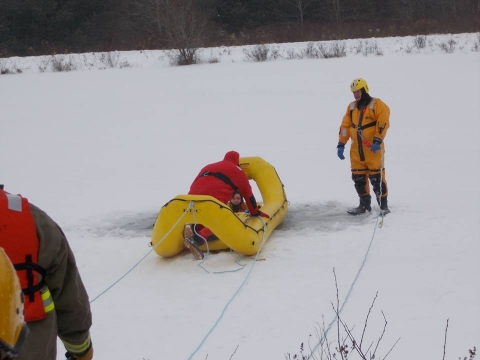