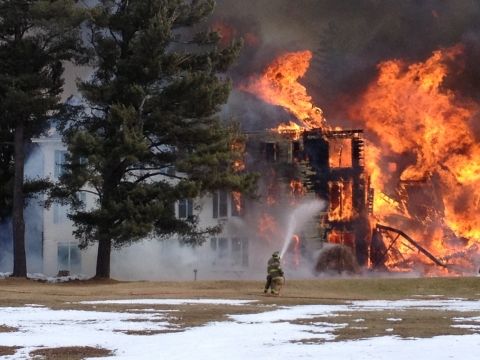 Top: Fire engulfs the historic Rexmere Hotel around 11 a.m. on March 25, 2014. Photo by Chris Becker. To see a slideshow of the fire as it destroyed the building in about 20 minutes, see the bottom of this story.

Above: Video of the Rexmere collapsing in flames. Shot by Joshua Sparkes and shared with the Watershed Post.

The Frank W. Cyr Center, formerly the Rexmere Hotel, burned to the ground Tuesday on West Main Street in the village of Stamford.

According to eyewitnesses at the scene, the fast-moving fire began shortly before 11 a.m. By around 11:20 a.m., the historic seven-story building had collapsed.

Below: Before and after: Two photos of the Rexmere taken about an hour apart on March 25, 2014. The first, taken by Chris Becker, was shot around 11 a.m., shortly after the fire started. Bottom, the same side of the building after it collapsed, taken at noon by Lissa Harris.

The Stamford Fire Department arrived on the scene minutes after the building's fire alarm went off, according to Chris Becker, who lives around the corner from the Cyr Center on Lake Street, and serves on the board of the nonprofit that owns the building, the Catskill Mountains Educational Center (CMEC). But despite the quick response time, firefighters were unable to prevent the destruction of the building.

"Within 20 minutes, the fire was across the whole front," Becker said.

By around noon, hundreds of firefighters from many local fire companies had arrived and were battling the blaze amid thick plumes of smoke.

Above: Firefighters battle the blaze at the collapsed remains of the Frank W. Cyr Center/Rexmere Hotel midday on Tuesday, March 25. Video by Lissa Harris.

West Main Street was closed to traffic, and the power to the neighborhood was shut down while firefighters fought the flames. Several residents of the street were evacuated shortly after noon because of the thick smoke. One was Patty Beck, another CMEC board member who lives a couple of houses down from the Cyr Center.

"They're worried about the chemicals," said Beck, taking a minute to speak to a reporter from behind the wheel of her car, as she was heading for a friend's house to wait out the aftermath of the fire. Beck was unsure when she would be allowed back in her house.

The blaze engulfed the building with ferocious speed, Beck said. "So fast. It was just like paper."

While the fire raged, a huge plume of smoke from the blaze was visible for miles along Route 23, outside the village. According to an official at Delaware County Emergency Services, Route 23 was not shut down during the fire, although some traffic in the village was detoured around busy intersections.

The official also said that roughly 300 firefighters were on the scene of the blaze, and that 15 to 20 fire companies from Delaware, Otsego, Schoharie and Greene counties responded. She said that six aerial ladder companies -- from the city of Oneonta and the towns of Walton, Catskill, Stamford, Middleburgh, and Sidney -- were dumping water on the blaze, pumped from the Rexmere's pond.

In the afternoon, an excavator was called in to dig out the Rexmere's basement, which was still aflame, according to the official.

Above: The former Rexmere Hotel engulfed in flames. Photo by Evelyn Kuhn.

According to a report from WBNG Binghamton, the Stamford Fire Chief said two caretakers were living in the building but were not there at the time of the fire.

Built in 1898, the Rexmere was a seven-story wood-frame hotel built in the style of the great 19th-century Catskills resorts. In its heyday, the structure could hold 400 guests and 125 staffers at a time, according to the building's Coldwell Banker real estate listing, which has now been taken down, as has its video tour.

A story in the Mountain Eagle about the fire has some brief history of the building:

The Rexmere served as a public hotel for 58 years. Built in 1897, it was opened in 1898 by Dr. Stephen Churchill. It changed hands after Churchill’s death in 1917 operating as a hotel until 1955. The Redemptinist Order then utilized it as a summer retreat.

In 1967, the building became an educational center, and for a time housed administrative offices for the Otsego-Northern Catskills Board of Cooperative Educational Services (BOCES). BOCES vacated the building in 2011, according to a Mountain Eagle article.

Last year, the CMEC, which owns the property, put the building on the market. According to Coldwell Banker Timberland Properties real estate agent Benjamin Fenton, who represented the property, the building was under contract with a buyer when it burned down.

The Daily Star has identified the building's prospective buyer as Hunt Slonem, a wealthy, internationally-renowned Manhattan artist with a yen for restoring grand old homes and filling them with art and furniture. Slonem already owns a 19th-century mansion in Kingston and two estates in Louisiana.

In 2007, Joyce Wadler -- a New York Times writer with local roots in Delaware County -- wrote a profile of the artist, who had just bought an 1832 plantation house in need of restoration in Batchelor, Louisiana. In the article, Wadler wrote of Slonem's all-consuming passion for old mansions:

Mr. Slonem’s origins? Unlikely as it seems, the United States Navy. His father was a submarine captain; the family moved often. Mr. Slonem credits the hothouse flowers and lush foliage that later appeared in his work to time spent in Hawaii; his experience there also provided the beginnings of his interest in spiritualism. Great and exotic homes have figured in his imagination from the time he was a boy.

“I was this misfit child,” Mr. Slonem says. “They were always telling me to tone it down. When I was a kid I wanted to build the Eiffel Towel in the backyard. I was always looking for something to do. Models of Polaris nuclear submarines weren’t doing it for me.”

Contacted by phone at Slonem's Manhattan studio, a representative said that the artist declined to make a statement on the Rexmere at this time.

Standing on West Main Street, watching fire truck after fire truck roll towards the billowing clouds of smoke, Becker was visibly shaken by the fire.

The abrupt loss of the village's most historic building, just as it was about to be sold to a buyer who could preserve it, was a devastating blow, Becker said. "We have worked very hard to see a future for this building," she said.

There was one stroke of good luck in the disaster, Becker said: Earlier this month, the CMEC moved an art collection with historic value, jointly owned with the MURAL Gallery, out of the building. One iconic piece of art remained in the building, and was lost: a painting of the Rexmere called "Days Of Yore - Rexmere 1898-1998," by artist Roberta von Hahmann.

This is the second major fire to happen in the village of Stamford in a week. A family home on River Street was destroyed by fire last Tuesday, March 18.

Julia Reischel contributed to the reporting of this story. The story was updated at 6 p.m. to include information about the Rexmere's prospective buyer.

Below: A postcard depicting the Rexmere Hotel in Stamford, printed around 1900. From the collection of the Stamford Village Library via the New York Heritage Digital Collections website. 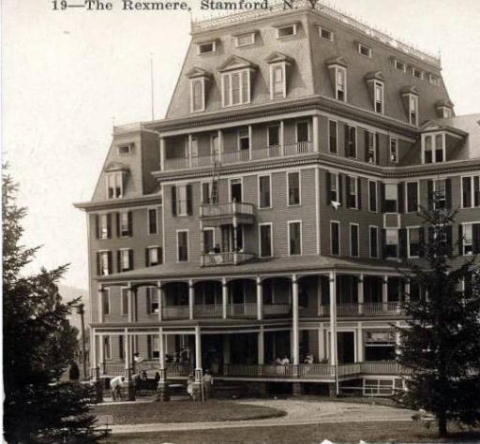