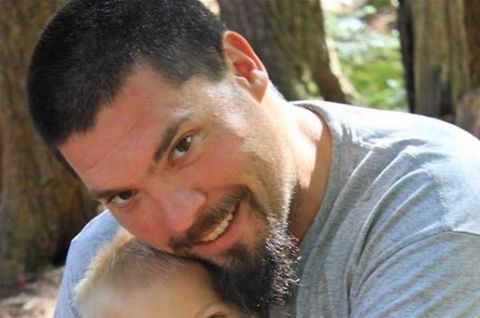 Above: A photo of Aron Thomas posted on a GoFundMe page dedicated to a fund drive for his wife and children. Photo used with permission.

A fund has been started to benefit the wife and two young children of Aron Thomas, a 33-year-old Olivebridge man who was shot and killed at the Kingston office of the New York City DEP on Monday.

One of Thomas's DEP coworkers, 53-year-old David Reese of Gilboa, was arrested after the shooting and charged with second-degree murder.

Thomas leaves behind his wife, Susan Thomas, and two children, a two-year-old boy and a girl just six weeks old. On Tuesday, Aron's sister, Kylene Thomas, started an online fundraising campaign on GoFundMe to help the family in the wake of Thomas's death. As of late Tuesday morning, the fund had raised about $1,600 of a $50,000 goal.

please help in raising money to help support my brother's wife and children. this unexpected loss is going to be a financial burden for his wife. she is currently home on maternity leave with a six week old infant. they also have a 2 yr old son. my brother was taken from us too soon and in the harshest way imaginable... by another human being.... the least i can do is try to set up support for his wife and children.

Reached by phone, Kylene Thomas, a Shokan resident, confirmed that the fund had been started by the family. Kylene and Aron's parents also live in the area.

Outside of his job as a watershed maintainer for the DEP, Aron Thomas was an avid hiker and hunter, an outdoor guide with a fledgling guiding business, and a volunteer with local firefighter and first aid groups, said Alexandria Weir, a Shokan resident who babysat for his children. He was devoted to his family, she wrote in an email to the Watershed Post.

"He was an outstanding community member," Weir wrote. "He was a family guy and always ALWAYS put his family before him, I've seen it first hand."

A few other locals in the rural Ulster County town where Thomas lived -- Olive town supervisor Sylvia Rozzelle and fellow Olive First Aid volunteer Dan McCabe -- spoke with the Times Herald-Record about him. Rozzelle also told the Daily Freeman that Aron Thomas's death is taking a toll on the whole town.

“We all knew him. It’s a small town. He was a lovely, very fine young man,” Olive Supervisor Sylvia Rozzelle said of Thomas. “I gave him his hunting licenses and his fishing licenses. He was always a pleasure to deal with.

“We lost a good one,” said Rozzelle, who until recently was the Olive town clerk. “It’s very tragic.”

Below: Aron Thomas is memorialized on a sign outside the Shokan firehouse of the Olive Fire Department on Route 28. Photo by Jennifer Strom. 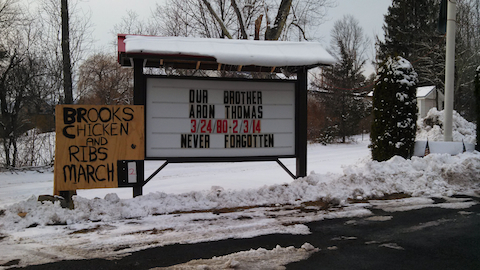