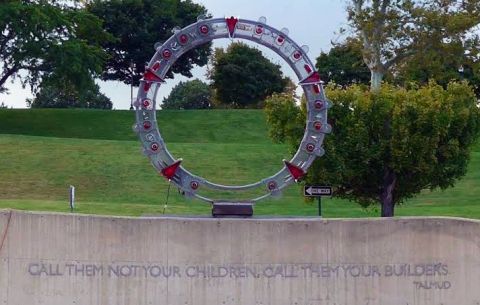 A Boiceville sculptor has just returned from Baltimore, where he helped install his “Stargate”—a massive metalwork crafted mostly of upcycled vintage auto parts—in a prime location at the American Visionary Art Museum in Baltimore.

Left: Heller next to his sculpture of a guitar made out of a 1953 Pontiac. Photo via the Fabulous Furniture website.

Perhaps it was written in the stars. Steve Heller, the creative force behind Fabulous Furniture, a furniture store based in the Ulster County hamlet of Boiceville since 1971, is passionate about automobiles, dinosaurs and rocket ships. Drivers passing his workshop on Route 28 can see some of his creations, including a silver Dodge Magnum licked with green flames called the “Cro-Magnum” and a large silver rocket labelled “Roswell or Bust.”

Deep space travel via wormholes is a logical extension.

"Stargate" came into existence thanks to two of Heller's favorite patrons, Diane Nadler and Allison Bird, who commissioned the work in 2007.

“Steve started watching it and then begging me to join him, so I did, and I promptly got hooked,” says Frankel. “It’s the most convoluted TV show. We just loved it.”

The “Stargate” franchise, which will soon enjoy a big-screen reboot, is set in a universe where travelers can jump from planet to planet through wormholes made by ancient circular artifacts called stargates.

It took Heller a year to build his own stargate.

“He had so much fun,” says Frankel. “He knew exactly what it should look like.”

The sculpture was finished in 2008. It was housed on the grounds of Fabulous Furniture, where it attracted "tons of attention," Frankel says.

In April 2014, Nadler and Bird suggested that they to donate the sculpture to the American Visionary Art Museum so that the public could enjoy it full-time.

“Steve is like the eternal boy,” says Rebecca Hoffberger, the founder and director of the museum, which showcases the creations of self-taught individuals following their personal muses.

Below: "Stargate" has a prominent position in the sculpture garden of the American Visionary Art Museum in Baltimore. Photo by Martha Frankel.

“We’re delighted to be doing something to highlight his work,” she said. “He was in our last show with his robot figures and a bench made out of computer motherboards. We mounted “Stargate” outside, in such a way that it frames Federal Hill Park, but as you walk up to it, it frames the sky.”

“I’m an artist of I-don’t-know-what-you-would-call-it,” says Heller. “I’ve always loved art, sculpture, cars, dinosaurs, and rocket ships. I’m a very lucky boy, and believe me, I know it! Six decades and nothing much has changed. Never underestimate the power of luck; sometimes you’re in the right place at the right time.”

After visiting the museum and falling in love with it--“It’s such accessible art; there’s nothing makes you say ‘what the heck is that?’” he says--Heller dreamed of meeting Hoffberger, its creator. An invitation to bring his “Cro-Magnum” art car to Artscape 2013 in Baltimore, the largest free art festival in the US, seemed to offer the chance.

“The guy organizing Artscape found 'Cro-Magnum' online and loved it, and invited us down,” says Heller. “He encouraged me to bring a lot of my art with me, so I did. I brought rocket ships and robots, mostly made out of vintage car parts. I was just hoping to meet Rebecca; there was a breakfast scheduled at the museum that Saturday morning, but she didn’t make it. I was so disappointed I wanted to go home.”

But it turned out that their host was a friend of Hoffberger’s, and before Heller knew it, a dinner date was made.

“It was pouring, with lots of lightning and thunder,” Heller recalls, “and the restaurant is on eye level with this giant whirligig with all these fabulous spinning moving parts going wild. Then, like magic, the storm blew away and the rain stopped, so I could show Rebecca my work. Right there on the sidewalk, she took two rocket ships and a robot. I was over the moon to be in a show at this museum I so loved and feel so connected to.”

Heller's trip to Artscape with Cro-Magnum in 2013 led to several of his works being included in the museum's 2013-14 exhibition, "Human, Soul and Machine: The Coming Singularity." The installation and celebration of "Stargate" in was timed to coincide with the opening of the new exhibition, "The Visionary Experience: St. Francis to Finster."

When Hoffberger got a letter from Heller offering “Stargate” to the museum, she was the one who was over the moon.

Earlir this month, the couple traveled to Baltimore, and Heller reassembled “Stargate” at its new home in the American Visionary Art Museum's outdoor sculpture garden.

“Where she put it is so fabulous it’s unbelievable,” Heller says. “It’s in a place of honor in the sculpture garden, by the amphitheater.”

Hoffberger is equally delighted to give the work a home.

“Did you know there’s an ancient stargate in Iraq?” she says. “The idea that within normal space you can make sacred space, or a gateway to another world, is common across so many cultures. And after all, Einstein said the greatest scientists are artists. I’m fascinated by the interface between ancient wisdom and modern science, and the stargate is based on the same theory as wormholes, which are real.”

And now there’s one in Baltimore. If you can’t get down there right away, or even if you can, stop at Fabulous Furniture and be amazed by Heller’s next opus: a giant flying saucer.

“I’ve been working on it like crazy,” he says. “Earthlings and others, you should come check it out.”

Correction: A previous version of this story included an incorrect timeline of the making of "Stargate," and has been re-edited with correct dates.