To save Spruceton Road, Greene County may invoke eminent domain 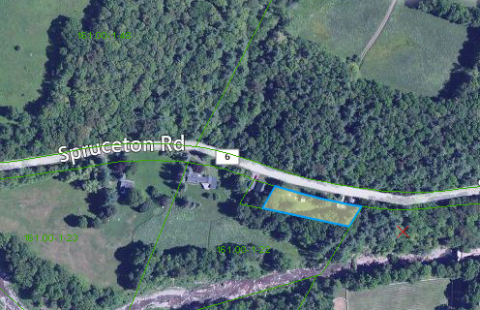 Above: Aerial imagery of a private property in Lexington that stands between the Greene County legislature and a project to stabilize a landslide that threatens Spruceton Road. Source: Greene County GIS web map.

Seeing no other way to carry out a project to stabilize a landslide that threatens to wash out Spruceton Road along the banks of the West Kill, the Greene County Legislature is preparing to use eminent domain to seize a Lexington private house and the land it sits on.

On Monday, the Daily Mail reports, the Greene County Legislature's Public Works Committee voted 12-2 in favor of a resolution to take the property at 924 Spruceton Road by eminent domain, in an emergency proceeding that bypasses the usual process of holding a public hearing. On Wednesday, February 20, the full legislature will vote on the resolution.

The county's efforts to negotiate with the landowner, Daina Sulaitis, have been unsuccessful so far. Greene County Legislature chairman Wayne Speenburgh told the Daily Mail that the county has a duty to the other 250 residents who live beyond Sulaitis's property on Spruceton Road, a dead-end road with no other way out of the Spruceton Valley:

“There are 250 residents who are going to be stranded beyond this point unless we get it fixed,” Speenburgh said, “and if [the landowner is] not cooperating, and they won’t even let you on the land, there are certain emergency situations and if that happens and we don’t do anything, we are going to be chastised for stranding 250 homeowners.”

“As long as it has been substantiated by the engineers that there is no other way to do this,” Speenburgh added, “then I am going to support eminent domain.”

To stabilize the streambank and keep it from further sliding into the West Kill, legislators say, the house at 924 Spruceton Road must be removed. The Daily Freeman reports that federal and New York City watershed grants would fund the restoration work, once the county pays for the acquisition of the house and has it removed from the property:

The county would have to pay for the property and the removal of the home, [legislator James] Hitchcock said. He said the rest of the project, which includes the stream bank stabilization, would be financed by grants.

Hitchcock said the National Resource Conservation Service would provide 75 percent of the funding, and the New York City Department of Environmental Protection would fund the other 25 percent since the property is within the city’s watershed. He said funding will not be forthcoming until the county takes title to the Sulaitis property.

According to Greene County's GIS property database, the house at 924 Spruceton Road and the half-acre property it sits on are assessed at a value of $86,700.

The West Kill creek in Lexington, one of many in the area that feeds into New York City's vast upstate water system, has a long history of flooding and washouts of local roads and bridges. In recent years, several streambank stabilization projects have been carried out on the banks of the West Kill, which are described in detail in reports available from the Greene County Soil and Water Conservation District.