Above: A Poughkeepsie Journal video about the re-opening of the newly restored Rosendale Trestle.

Rail trail lovers, rejoice: On Saturday, June 29, the Rosendale Trestle, a 118-year-old span over the Rondout Creek, will be reopened to public walking access, thanks to the restoration efforts of the Wallkill Valley Land Trust and the Open Space Institute.

Trail fans will be celebrating the reopening of the bridge at Willow Kiln Park on Saturday, with live bluegrass, a silent auction, a yard sale, and tie-dyeing "Track The Trestle" T-shirts. Or, if you like, you can join the throngs on the bridge, marveling at the views of Joppenburgh Mountain and the Shawangunk Ridge and basking in the cool 55-degree air rising up from the Rondout Creek, 150 feet below your feet.

The restoration of the bridge has been a $1.5 million effort, some of it carried out by volunteers. The bridge has been reinforced with new railroad ties and steel railings, and its decaying wooden surface has been clad with pearly gray recycled composite decking.

Some work remains to be done before trail groups' vision of an unbroken 24-mile rail trail from Gardiner to Kingston is complete, including the design and construction of a walking trail from the south side of the Rosendale Trestle into Rosendale along the Rondout.

But the trestle, with its breathtaking views and dramatic 940-foot span, is the centerpiece of the project, and a major milestone for the Wallkill Valley Rail Trail. When the trail is finished, it will connect to the Hudson Valley Rail Trail in Highland, and to east-of-Hudson trail networks via the Walkway Over The Hudson.

If Ulster County succeeds in opening up the Ulster & Delaware rail corridor as an unbroken rail trail from Kingston to Highmount -- a project that would require wresting most of the corridor away from the active Catskill Mountain Railroad -- the growing trail network in the Hudson Valley would acquire a long westward arm into the Catskill mountains, too. It's an attractive prospect for Open Space Institute vice president Bob Anderbergh, who told the Poughkeepsie Journal (see video above):

It really is a grand vision. This rail trail will extend all the way from the city of Kingston ultimately down to the village of Walden, which is 32 miles. And Kingston, which was Grand Central for the railroads -- someday, you may be able to get on the old Ulster & Delaware rail bed, which would take you up into the high peaks of the Catskills, or go down the old O&W right-of-way, to Ellenville and beyond.

So you have 50, 60, 70 miles of rail trail, all coalescing right here, plus the possible linkage over to the Walkway Over The Hudson and the Dutchess Rail Trail on the other side of the river. So I view this as probably going to be one of the premier rail trail networks in the state of New York. And of course, as I mentioned before, this is an enormously beautiful rail trail. It goes through open farmland, it cuts through the northern end of the Shawangunk Ridge, it runs through the Binnewater Hills. In terms of visual beauty, it has a bit of everything.

Below: The Wallkill Valley Land Trust's Melissa Brunette pays a visit to the restoration in process on June 6. Photo from the WVLT's Facebook page. 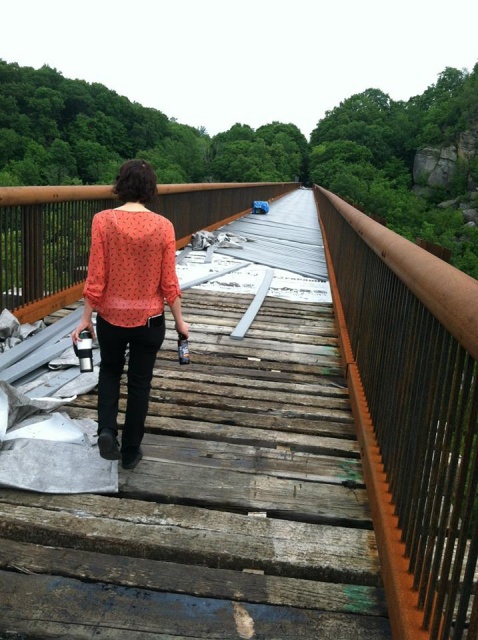