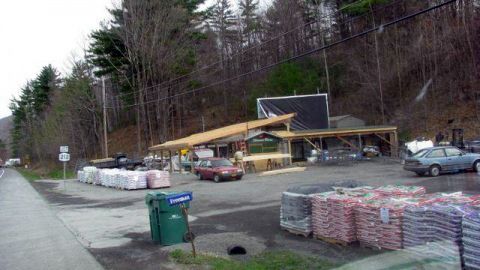 Above: A photo of Hanover Farms taken in March of 2012, during the construction of an illegal addition that triggered a legal battle between the farmstand and the town of Shandaken. Photo by Rusty Mae Moore.

In a fierce legal battle between the town of Shandaken and a popular Route 28 farmstand that has been flouting local zoning law for many years, the town recently won a major victory.

In a decision issued on Nov. 27, Acting Supreme Court Justice Mary Work ruled that Hanover Farms must cease all operations at the farmstand on Route 28 in Mount Tremper, and must not open the farmstand unless the town grants the business a permit. Hanover Farms' owners also have 60 days to take down a roughly 2,200-square-foot new retail space that was built to expand the farmstand last year -- a building project that owner Al Higley carried out despite several stop work orders issued by the town of Shandaken in March of 2012.

Unless Higley appeals, the decision will settle two lawsuits that have been ongoing since early 2012 -- one filed by Hanover Farms against the town of Shandaken, the other by the town against the farmstand.

In the legal proceedings, Hanover Farms argued that the town's stop work orders were not valid, claiming that they were vague and lacked required information, and that therefore they could not legally be enforced. In her decision, Work dismissed this argument, writing that the court found Hanover Farms' position "unsustainable."

The farmstand may also have to pay steep fines for operating in violation of the stop work orders. According to the judge's decision, the town claims that they are entitled to fines of $200 per day for each day after March 18, 2012 -- a fine that could add up to nearly $125,000. The Ulster County Surrogate's Court will hold a hearing to determine what fines will be imposed on the farmstand on February 28, 2014.

The dispute between the town and the farmstand goes back much longer than the recent lawsuits. Since 2004, Hanover Farms has been operating a large farmstand in a residentially-zoned stretch of Route 28, where until 2012, zoning law forbade any farmstands larger than 100 square feet. A 2011 proposal to change the zoning in the area around the farmstand was widely opposed by local residents. Last February, in an effort to allow the farmstand to operate legally, the town passed a new farmstand law that allows a farmstand to be larger than 10 by 10 feet, as long as it takes up less than 5 percent of the square footage of the parcel it sits on.

The farmstand has made no effort to comply with Shandaken's new farmstand law, which requires owners to apply for a special farmstand permit.

To complicate matters, Alfie Higley Jr. -- who is the son of Hanover Farms owner Al Higley, and also involved with the farmstand -- sits on the Shandaken town board. Higley Jr. has recused himself from several town board decisions involving the farmstand.

Shandaken town supervisor Rob Stanley said that he had hoped the longstanding dispute could be settled more amicably, but that he was pleased with the judge's decision.

"We are satisfied that we were found to be correct in our diligence and our enforcement of town laws," Stanley said. "It does not matter who you are in this town. The law is the law, and you need to be responsible to your neighbors."

Stanley said that the dispute had already cost the town about $50,000 in legal fees.

He also said the farmstand appeared to be operating on Friday, despite the judge's order to cease all operations on the site.

"I just had one of my councilwomen stop by there, and he has a sign out for a half-price sale today," Stanley said.

Reached by phone at Hanover Farms on Friday afternoon, owner Al Higley denied that the business was open, and told the Watershed Post that he had no comment on the judge's decision.