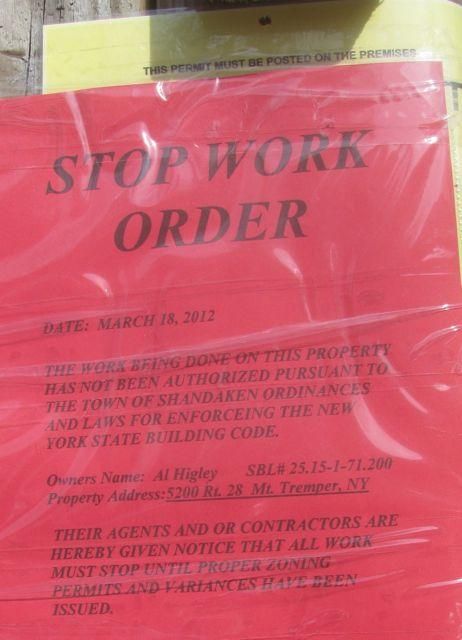 Stop-work order attached to the work site at Hanover Farms on Route 28, taped on top of the original building permit. Construction work continues unabated at the site. Photo by Rusty Mae Moore.

A Route 28 farmstand in Shandaken that has been embroiled in conflict over zoning violations with the town for years is doing construction work in defiance of a stop-work order issued by the town on Sunday, March 18.

On Wednesday, March 21, the town board met in executive session to discuss possible legal action against Hanover Farms for doing work in violation of the stop-work order. Board member Alfie Higley Jr., who runs Hanover Farms with his father Al Higley, recused himself from the meeting.

But it appears the farmstand has struck first. According to town supervisor Rob Stanley, Hanover Farms filed a lawsuit against the town on March 28.

"Mr. Higley's attorney filed a lawsuit against the town at 3pm yesterday," said Stanley, referring to the elder Higley. "We were hoping to resolve this civilly, but apparently Mr. Higley wants to take this to the next level."

Al Higley told the Watershed Post earlier in the week that he was better able to fight the issue out in court than the town of Shandaken.

"I have more money to fight a lawsuit than the town does," he said.

On March 1, Hanover Farms applied for a building permit from the town to make repairs from damage caused to the farmstand by the Irene floods last August. A permit was granted on March 9, and work on the farmstand has been underway since then.

But, Stanley said, the farmstand has gone beyond the work allowed by the permit.

"The permit was for roof repairs, and they poured a concrete slab under the structure," he said.

In an interview last week, before the lawsuit was filed, Higley said that although new concrete was poured this month, the footprint of the farmstand remains the same.

Higley also said that he was frustrated by what he sees as continuing harassment by the town and some residents. He estimates that he has spent $181,000 in legal fees over the farmstand in the last eight years.

"The last four supervisors of Shandaken have lost their jobs over the farmstand," he said. "It sometimes seems that some people don't want to have any business here."

In an effort to allow Hanover Farms to operate legally, Shandaken passed a new law governing farmstands on February 23. The new law loosens previous restrictions on the size of farmstands in residential areas, like the spot where Hanover Farms is located. Instead of 10 feet by 10 feet, a farmstand can now be up to 4.9 percent of the size of the parcel it sits on.

The law also includes provisions about signage and setbacks, and requires farmstand operators to apply for a special permit -- which, Stanley said, Hanover Farms has not done.

"Hanover Farms has made no application under the farmstand law yet," said Stanley.

Below: Photos of Hanover Farms on March 23 and March 29, showing the progress of work being done on the farmstand. Photos by Rusty Mae Moore. 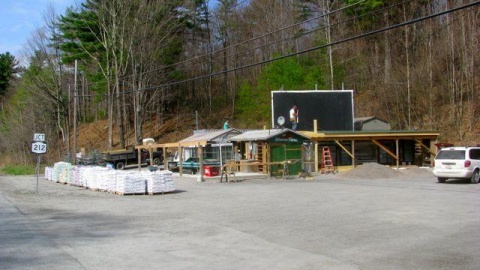 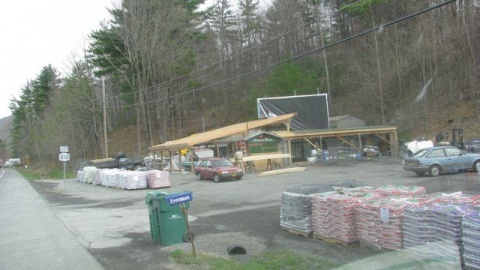 Photo of Hanover Farms on March 29, showing new roof systems on the front and side covering the roofs of existing sheds which comprised parts of the stand. The stop-work order still is affixed to the corner post of the front roof. Insulation is being placed under parts of the new roof.