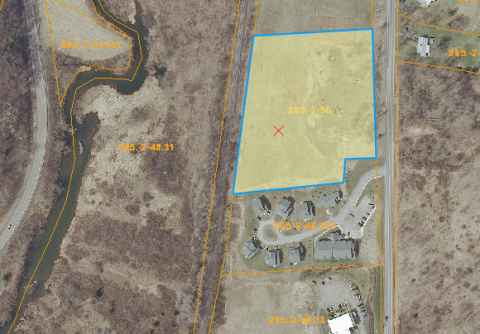 Above: A six-acre lot on County Route 38 in Arkville destined to be the home of the Catskill Recreation Center. Source: Delaware County GIS mapping tool.

After a hiatus of several years, plans for the Catskill Recreation Center -- a community fitness center in the Middletown hamlet of Arkville that will include a six-lane indoor pool and possibly an ice rink -- are moving forward once more.

The center was first proposed in 2007 by Kingdon Gould Jr., a local philanthropist who has formed a nonprofit called the Catskill Recreation Center Inc. to own and spearhead the project. In 2009, plans for the center were put on hold after an archaeological survey turned up some potentially interesting evidence on the site.

More than four years later, various state and watershed permitting hurdles have been cleared, and construction on the site is about to begin. On Monday, July 8, the first ceremonial shovel will be lifted at a noon groundbreaking ceremony at the Route 38 site, said Middletown supervisor Marge Miller, who hopes that the center might be built by early 2014.

"Mr. Gould feels an enormous amount of urgency," Miller said. "The steelworkers have already booked rooms in the Pakatakan Motel."

The facility will cost about $3.5 million to build, Miller said, and the building will be carried out by the Syracuse architectural firm VIP Structures, who designed the center. VIP Structures also designed the 105,000-square-foot Skaneateles Community Center, a fitness center that includes an indoor pool and ice rink.

Thanks to Gould -- who has been a major benefactor to many other local causes, including Irene flood recovery efforts in Middletown and the rebuilding of the Fleischmanns village park -- the project currently has enough seed money to get the center built, Miller said. But questions still remain about how long-term maintenance will be funded. Project supporters are investigating grant opportunities from local foundations.

"The build is completely paid for," Miller said. "My hope is that half of that money can be leveraged from other sources so it can go toward establishing an endowment."

In a 2008 article on the project, the Catskill Mountain News reported that the first phase of construction would not include an ice rink, but that one might be added later. Miller said that the Olympic Regional Development Authority, the state authority that recently took over the management of the Belleayre Ski Center, has expressed some interest in partnering with the center on building an ice rink.

Below: Architect's rendering of the Catskill Recreation Center as seen from the south on Route 38. Source: VIP Structures.