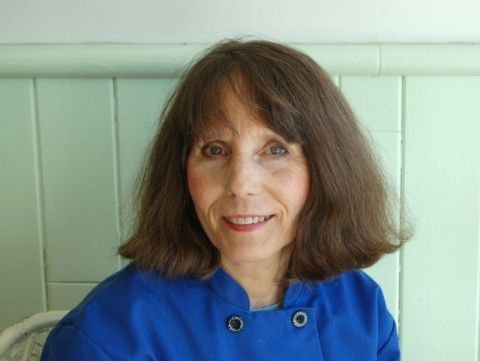 Above: Pam Brown, owner of Woodstock's Garden Café On The Green. Photo from a GoFundMe page that is seeking donations to help offset Brown's medical bills. So far, donors from the community have pitched in over $27,000 of a $50,000 goal.

Pam Brown, owner and chef at Woodstock’s all-vegan Garden Café on the Green, received the life-changing news of a cancer diagnosis a few months back. For an independent businessperson, the news was especially devastating: Business owners, especially hands-on types with high standards, seldom have much of a safety net.

But what Brown does have is the love of her staff and community. And this Thursday night at the Colony Café, the community is invited to come help out, and lose their cabin fever on the dance floor at the same time.

The event is a silent auction and benefit show, with a lineup that includes the Gold Hope Duo, Lindsey Webster and Luis Mojica. There will also be a silent auction in progress, offering a Best-of-Woodstock array of treats. Those who are otherwise occupied but would like to help can visit Brown's GoFundMe page. All of it has been put together by Brown's employees, who clearly consider her more of an inspiration and family member than just a boss – and are determined to see her through this crisis with her business intact.

Brown opened Garden Café on the Green seven years ago. Although it was an uphill battle, the café filled a great unmet need in Woodstock. That's no small feat in a well-established arts town known for its eclectic and diverse restaurant scene.

"She had a dream of a great vegan restaurant here and she went through a lot to get it going," said longtime employee Amanda Cabanillas. "Meeting all the codes and stuff – when she first opened she was cooking amazing food on hotplates."

Brown’s instincts were spot-on. There was an appetite for gourmet vegan fare, now sated with hearty soups, gluten-free baked goods, and creative entrees. White bean and artichoke crostini, tempeh mushroom stroganoff, butternut squash terrine with pistachio swirl: Vegans in Woodstock had never had it so good.

Brown’s passion created the cozy, exciting vibe that blesses the best eateries, with art shows, Kale Power T-shirts and ceaseless devotion to creating a special experience and atmosphere. Along the way, she’s been a massive inspiration to her staff.

It was with great dismay that her staff and community learned that their beloved culinary sorceress was seriously ill.

"Her longtime employees, we’ve become like a family," said Cabanillas. "As soon as we learned about the diagnosis and that she’d have to take some time off, we started brainstorming. She’s sick, we’re going to take care of her."

The long list of auction goodies is a testament to the talented circle of love Brown has woven around her. Poetry, yoga and guitar lessons; candles from Candlestock and dinner at Boitson’s; handcrafted jewelry and vegan cookbooks. New donations to the effort are still rolling in: A few days ago, a package of signed T-shirts, albums, and a record set arrived from the legendary Jeff Mangum of Neutral Milk Hotel.

The musical part of the evening promises to be equally stellar.

"This benefit seems like it’s stirring up a lot of attention. I’m overwhelmed, it’s great,” said Lara Hope, who will be performing with her Gold Hope Duo. "I get excited about doing a benefit for a good cause, and this is. We’re actually bringing a special guest, Chris Heitzman on mandolin. He’s also donated four guitar lessons for the silent auction. This is gonna be a night to remember."

Despite the overwhelming success of the effort -- the GoFundMe page raised over $20,000 in its first week -- Brown’s struggles are far from over.

“She’s hanging in there. She just finished the third round of chemo,” Cabanillas says. “She’s pretty tired, but amazingly strong, and incredibly grateful that all this is going on.”

"I’ve actually never met Pam personally, but Amanda and [fellow café employee] Alex are dear friends," Hope said. "And the neighbor thing, it’s just what we do. It’s what life around here is about."