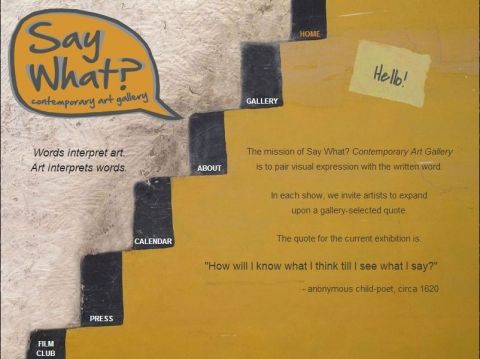 Above: The website for the new Say What? gallery in Tannersville.

Tannersville just got even cooler. A new contemporary art gallery, Say What?, has opened on Main Street (Rte. 23A), next door to the Orpheum Theater, in a space owned by the Catskill Mountain Foundation. We talked to gallery manager Chris Cade about the opening exhibit and what to expect from Say What? in the future.

CC: We’re very encouraged. We opened on Wednesday, 12/12, at 12:12 – and already there’s been a lot of foot traffic. The location right next to the theater is ideal [...] we’ll be staying open late – at least till curtain time – to accommodate theatergoers. We plan to do that whenever they have a show on; it gives us both a chance to increase audience.

In the spring, the Hunter Foundation plans to open an antiques gallery across the street. Downtown should be pretty lively.

Yes, we’re excited about it and we intend to make it an annual event. Our opening reception was [in the middle of December]; we had a great turnout and sold some pieces, which was great.

We’ve got 40 works, mostly works on paper, some ceramics, some paintings on canvas. People took the theme in their own directions – some are straightforward, some are pure design, some are group pieces. There was some guidance, but the works were completely developed by the students.

WP: The theme is intriguing.

CC: Yes. We asked artists from the two mountaintop high schools, Hunter and Tannersville, to respond to the quote, "How will I know what I think 'till I see what I say?" which is attributed to an anonymous child poet back in 1620.

WP: Who thought that idea up? Where do you even find quotes from anonymous 17th-century child poets?

CC: One of the directors found it in a compendium of quotes. It’s a little bit astounding to me too, and it evoked some interesting responses.

WP: So who are the directors?

CC: There are three: Elena Patterson, Jane Bayard Curley, and Ed Cachianes. They are the driving force behind the gallery. Elena is a graphic artist and painter, Jane is a freelance curator, and Ed is a designer and playwright. They all have houses here [in Greene County], and two of them have homes downstate also. They came together around developing a space up here to showcase contemporary art. The nearest galleries, operated by the Catskill Mountain Foundation and the Hunter Mountain Foundation, have tended to focus more on classical and traditional pieces.

WP: And what’s next? What can Tannersville expect from Say What? going forward?

CC: The current show runs through January 27. On February 5 we’re opening the second show. The quote is “We are symbols and we inhabit symbols.” We reached out to artists around the tri-state area, with a focus on local  there’s a lot of talent around these hills.

Going forward, we welcome all media – sculpture, video installations, whatever any artist wants to do with the current theme. As long as the gallery can physically support it, we’ll consider putting it in.