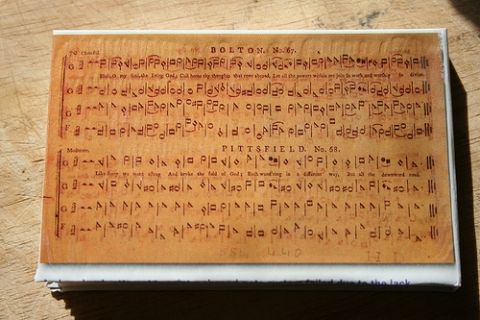 Above: Photo of a page from an 1803 shape note tunebook, The Art Of Singing by Andrew Law. Photo by Flickr user Kelly Taylor; published under Creative Commons license.

The shape note revival is coming to Roxbury's newly renovated Kirkside Park barn in the upcoming week -- and those of us who may not be American Idol material, but nevertheless love to make some joyful noise, may be at serious risk of becoming addicted.

The American tradition of shape note singing was born in the 1800s, and lives on today mainly through singing groups that draw material from an 1844 tunebook called The Sacred Harp. The first shape note tunebook was published Albany in 1801, a book entitled The Easy Instructor that offered a simplified notation system using basic shapes and syllables -- fa, sol, la, mi -- that regular folks without much music instruction could use to quickly master tunes. Over the years, shape note has gone into obscurity but never disappeared, persisting through the generations in churches and communities in the rural South.

Lately, this rural American musical movement has been experiencing a revival -- and returning to its Northeastern roots. Large shape note communities have sprung up in Western Massachusetts and New Jersey in recent years, drawing participants young and old.

“I got a rush: 'Oh my God, what is this? It’s just so cool!'" Fenton said. "I went online and found a monthly group in Kingston. It changed my life. I’ve always sung, but not like this -- I had to unlearn everything. Shape note isn’t a performance art; it’s not sweet choral stuff. It’s straight from the gut and heart. Your whole body’s involved.”

To bring shape note to the present-day rural Catskills, Fenton has been collaborating with ethnomusicologist Ben Bath, who leads weekly sings at Bard College, and with Catskills lifer Betty Sherwood, whose husband’s family was involved with the now-defunct First Old School Baptist Church in Roxbury's Denver Vega valley. Sherwood had archival hymnals from the church to share, in which several of the hymns from the Sacred Harp tunebook appear. Bath had a wealth of shape note expertise. Together, they laid plans for a local week-long shape note singing school, helped along by a grant from the O’Connor Foundation. Bath, who’s been a shape note aficionado since the age of 14, will be leading the class.

If shape note is happening nearby, Fenton says, you’ll know it. "At Bard, we always get 12 or 15 people stopping in and saying, 'Wow, I heard you a block away,'" said Fenton. "And they’re not complaining."

So bring your lungs and your family -- kids are welcome -- and join in the joy. The school will be held each evening from Monday, August 5 through Friday, August 9 in the newly renovated barn behind Kirkside Retirement Home. On Saturday, August 10, the week-long singing school culminates with a pot luck and community singing at 6pm. Participants from the Kingston Sacred Harp singing group and the Bard College Sacred Harp singing group will attend the community singing.

Shape Note Singing School. Barn at Kirkside Park, behind Kirkside Retirement Home, 53865 Route 30, Roxbury. Monday, August 5 through Saturday, August 10, 6pm to 8:30pm nightly. $20 for adults, and $15 for children 12 and up. Participants will receive a free copy of The Sacred Harp tunebook. For more information, call Ben Fenton at 845-254-4884 or see the event's Facebook page.

Below: A clip about Sacred Harp and the shape note revival, filmed in 2009 by Paste Magazine's TV show, "Pop Goes The Culture."