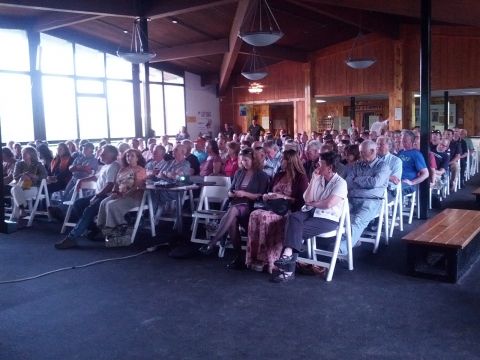 Above: More than 100 people pack the Discovery Lodge at the Belleayre Ski Center for an informational meeting about proposed upgrades to the ski center, held by the state Department of Environmental Conservation (DEC) on Wednesday, May 22. Photo by Lissa Harris.

The state has added an additional 30 days to the public comment period for a pair of proposed projects on Highmount: The upgrade and extension of the state-owned Belleayre Ski Center and the building of the Belleayre Resort, a private development by Crossroads Ventures that has been in the works for nearly 15 years.

On April 17, the DEC announced the public release of two documents that had long been in the works: A unit management plan for the Belleayre Ski Center with draft plans for a major upgrade and expansion, and a supplemental draft environmental impact statement for the Belleayre Resort submitted to the DEC by the developer. A cumulative impact analysis of the effects of both projects has also been released by the DEC. The agency is currently accepting comments from the public on the documents before a final decision is made on how to proceed with both.

Initially, the public comment period was slated to end on June 24. Under pressure from several environmental groups, including the Natural Resources Defense Council, the DEC has extended the comment period an additional 30 days, until July 24.

Local interest in the fate of both of these interconnected projects is intense, and the Belleayre Resort has been a magnet for controversy since it was first proposed in 1998. The DEC is expecting a large volume of comments on the projects.

DEC has scheduled a public hearing on May 29 at the Belleayre Mountain Ski Center's Discovery Lodge, on Route 28 in Highmount. The first session of the hearing will begin at 3 p.m. and the second session will begin at 6 p.m. Members of the public will be able to comment on the proposed projects at the hearing.