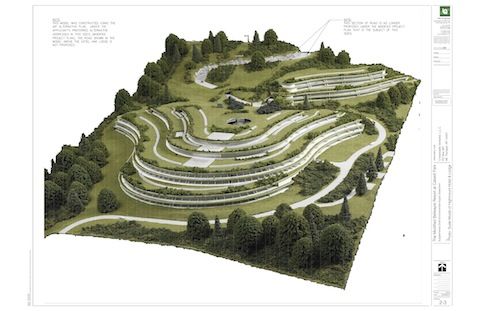 Above: Scale model of the planned hotel and lodge buildings at Highmount -- part of the proposed Belleayre Resort project -- from a supplemental draft environmental impact statement released Wednesday by the DEC.

The long-planned Belleayre Resort project took a step forward on Wednesday, with the release of a newly-revised draft of an environmental impact statement by the New York State Department of Environmental Conservation (DEC). The agency also released draft plans for the management of the Belleayre Ski Center that call for a major expansion of the ski area.

The Belleayre Resort project, first proposed in 1999 by private developer Crossroads Ventures, has been heavily revised since the last environmental impact statement was issued in 2003. The proposed project is now considerably smaller, and does not include some environmentally sensitive land once slated for development. A parcel of land that was originally planned to hold hundreds of housing units -- dubbed the Big Indian Plateau -- was sold to the state in 2011, in an agreement forged after Crossroads Ventures took heavy criticism from environmental groups and regulators about their plans for the area.

In its current form, the Belleayre Resort project includes plans for a 250-bed hotel and a 120-bed hotel, over 250 fractional-ownership condos and other housing units in various buildings, and an 18-hole golf course.

The project's total size is now less than half of what was proposed in 2003. The Belleayre Resort project's total acreage has dropped from 1,960 acres to 739 acres, and the portion to be developed has gone from 573 acres to 218 acres. Plans for roads and impervious surfaces at the site have also been substantially reduced.

The draft environmental impact statement estimates that the Belleayre Resort will directly generate 771 jobs in the region, 541 full-time and 230 seasonal and part-time, with a $24.85 million annual payroll. An additional 264 jobs will be created indirectly in the surrounding area because of the economic impact of the resort, the statement estimates.

The DEC also released a revised management plan for the Belleayre Ski Center on Wednesday, which calls for significant upgrades and expansions in Belleayre's facilities, and adding hundreds of jobs to Belleayre's payroll.

The expansion plan has been in the works for several years, and is mostly the product of the DEC. The ski center was transferred from DEC management to the Olympic Regional Development Authority (ORDA) in November of 2012, but is located on state land, and remains under the regulatory jurisdiction of the DEC.

The plan for the Belleayre Ski Center calls for constructing three new lifts and rehabbing two others, adding 16 new ski trails, building a new lodge and information booth, expanding the Discovery and Sunset Lodges, adding several parking lots, and making improvements to the ski center's snowmaking and other infrastructure.

The Times Herald-Record has an in-depth story on the Belleayre Ski Center expansion, most of which is slated to take place on the grounds of the long-defunct Highmount Ski Center next to Belleayre. The state does not currently own the Highmount parcel, but hopes to acquire it.  In the story, local Belleayre booster Joe Kelly, who is now vice chair on the ORDA board, says the $74 million expansion project would be a boon for the region:

"This is a long time in coming," Kelly said. "The upstate economy needs an economy."

The Watershed Post has uploaded the main Belleayre Resort supplemental draft environmental impact statement and the first part of the Belleayre Ski Center draft unit management plan to Scribd, where they can be read online. (For the rest of the documents, including appendices, see the links above to the websites of DEC and the LA Group, where they can be downloaded as PDF files.)

Many local and state organizations, and a few local towns, have a stake in the outcome of the projects underway on Belleayre Mountain. Stay tuned to this post for links to local reactions to the latest Belleayre Resort and Ski Center proposals; we will post them below.

4/18: This story has been updated to include more information on the Belleayre Ski Center upgrade plans.

The Catskill Heritage Alliance, which has been a vocal opponent of both the Belleayre Resort project and the transfer of the Belleayre Ski Center to ORDA, issued a letter on Wednesday afternoon urging its members to comment on the proposal:

“The permit application file is complete, but that doesn’t mean the Crossroads’ proposal is a done deal,” said Kathy Nolan, chair of CHA. “On the contrary, what happens now with Belleayre really depends on what residents say during the comment period. Our members don’t believe spending public money to help build a private, oversized ski resort for the wealthy on a sensitive ridgetop is in the public interest, and we’ve got research to prove it. Instead, we support approaches to developing Belleayre, including base area expansion at the Ski Center, and a resort hotel that isn’t so oversized, so high up and so out of touch, which would serve the public well. These options are provided for in the documents filed today, and they could become reality, if we turn out to back this approach for our community. Public comment in the next 60 days will really determine which approach prevails.”

In an earlier letter sent to the DEC on March 27, the Catskill Heritage Alliance was critical of the revised Belleayre Resort project, challenging Crossroads Ventures' claims that the project would benefit the local economy. In the letter, Nolan wrote that the reduced footprint of the resort was still too large for the environmentally sensitive mountaintop area, and argued that if new lodging is built, it should be built at the base of the mountain rather than at the ridgetop. The group has commissioned a consultant to review the recently-released draft environmental impact statement.