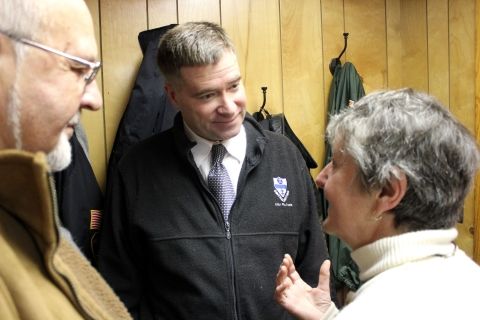 Above: Congressman Chris Gibson listens to Olga and Ivan Orisek of Forestburgh at his Liberty office open house on Wednesday, January 30. Photo by Jason Dole.

Though he's been in office since 2011, Congressman Chris Gibson (R-Kinderhook) is still a fresh face to much of the newly-created 19th Congressional District.

This week, Gibson has been busy opening several new offices in the 19th District. On Wednesday, it was Sullivan County's turn. Local officials, political supporters, and representatives of community organizations packed Gibson's open house at 92 Sullivan Avenue in Liberty.

“From the outset, Chris made it a priority to get over here and meet people so they could put a face to the name,” said Stephanie Valle, Gibson's deputy chief of staff.

Gibson will have 5 offices in NY-19 that will serve his constituents across 11 counties. The others are located in Hyde Park, Cooperstown, Kingston, and Kinderhook (Gibson's home town). The Liberty office will serve both Sullivan and Delaware counties. The office's consitutent service representatives are Paula Brown, a longtime Town of Colchester resident and business owner who previously worked in Gibson's Delhi office, and Liberty resident Christine Schiff, wife of Sullivan County Sheriff Mike Schiff.

“We've hired people who love people,” said Congressman Gibson. “I want folks in Sullivan and Delaware counties to know if we can serve you in any way, please come on down to this office.”

On Tuesday, Gibson held a similar open house at his new Kingston office, located in the Seven21 Media Center at 721 Broadway. On Wednesday morning, he met with the editorial board of the Kingston Daily Freeman to discuss topics ranging from climate change to gun control to gas drilling.

At the Liberty open house, the mood among local Republicans was celebratory. Many local Republicans see Gibson -- a moderate Republican who campaigned on a spirit of bipartisanship in last year's election -- as a welcome shift after 20 years of being represented by prominent progressive Democrat Maurice Hinchey.

"I hope [Gibson] does something for the people here. I don't like Hinchey, I yelled at him in Narrowsburg," she said. "We need jobs here, not fantasies and la-la land. You can't eat the leaves off the trees and you can't eat the vista."

A river runs through it: Local pols applaud the creation of the Delaware River Basin Restoration Program
Chris Gibson won't run for governor