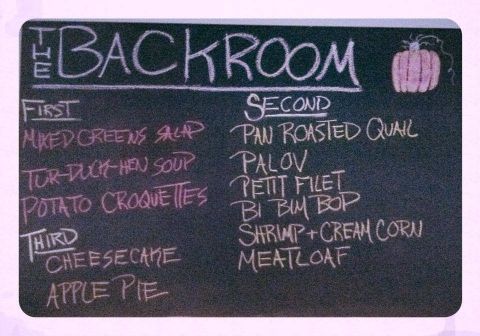 Above: The most recent menu at the Backroom in Andes, which features new dishes every week. Photo from the Backroom's Facebook page.

The Backroom, a petite, weekends-only restaurant occupying the back of Hogan's General Store in Andes, has gotten a lot of love from locals in the brief year it's been open.

But sometimes love just ain't enough. The restaurant will close by the end of the year, chef and owner Chris McGee told the Watershed Post today.

"To try to make it work just doesn’t work for me,” McGee said. “I have a great, loyal following, but at the end of the day, we’re just not growing it."

An exact closing date hasn’t been set. McGee plans to continue serving dinner Friday, Saturday and Sunday at least through October, he said. November and December are up in the air.

The Backroom celebrated its one-year anniversary in September, having made a name for itself among locals who appreciated its intimate creekside setting on Main Street and an adventurous menu that changed weekly. Every dish featured at least one local, seasonal and organic ingredient, and McGee used them as a jumping-off point to romp through cuisines from all over the world.

McGee served Mediterranean staples such as a hummus platter with local heirloom tomatoes; Indian-style coconut curry lamb, made with meat from Delhi’s GoatSheepShop; and pozole, a smoked pork and hominy soup that’s a specialty of Spanish grandmothers. He occasionally made his own ramen. During summer tomato season, his chalkboard menu offered “tomatoes three ways” one weekend and “tomatoes three more ways” the following weekend.

McGee, 42, ran a barbecue food truck in Brooklyn prior to moving to Delaware County. While living downstate, he grew the idea for a locally-sourced eatery hanging out with a buddy who was the chef de cuisine in a high-end Manhattan restaurant.

"His whole method of cooking, when he was cooking at home for himself, was to say, 'Let’s go to the farmers’ market and then decide what to cook,'" McGee said.

Adopting that ethos drove McGee toward the Catskills, where he could buy ingredients directly from farmers.

"Picking vegetables off a shelf in a giant warehouse while dodging forklifts was not nearly as fun as calling Madalyn [Warren, a local produce farmer] up on Route 30 in Roxbury and saying, 'Hey, what’s good today?' and having her say 'It’s all good, come and pick whatever you like,'" McGee said. "And I would go and collect my own broccoli or cauliflower or whatever else looked good."

Before launching the Backroom, McGee was briefly the chef at Buttercup, a short-lived restaurant located across the street from Hogan's that earned a complimentary mention from the New York Times before closing down just a few months later.

McGee plans to move closer to the city, where he’ll continue working as a chef, but probably not at his own place, he said.

"I’m a chef. I’m not the best entrepreneur, but I have an entrepreneurial spirit," he said. "This is the first of many apologies I’m going to be issuing, I guess."