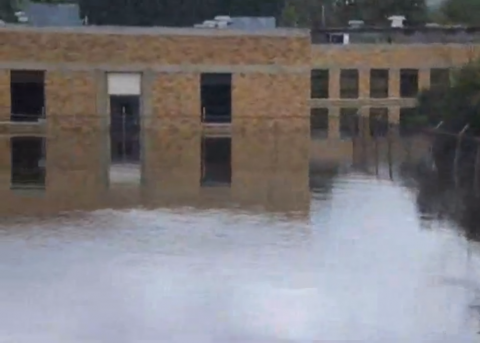 Above: Amphenol's Sidney manufacturing plant on September 9, 2011, after back-to-back floods from Irene and Lee caused heavy damage at the plant. Screenshot from video shot by state Senator John Bonacic.

Aerospace manufacturer Amphenol, whose Sidney manufacturing plant is one of the largest employers in Delaware County, will receive a $3.8 million federal disaster grant to build a new plant on higher ground in the town, officials announced Tuesday.

The company's Sidney plant sustained about $35 million in damage from flooding from Tropical Storms Irene and Lee in 2011, just five years after another massive flood caused heavy damage to the plant.

According to a release from Congressman Chris Gibson's office, the grant -- made by the federal Economic Development Administration through the Delaware County Industrial Development Agency -- will help fund the purchase of a new manufacturing site, the construction of Amphenol's new building, the extension of natural gas lines to both the existing plant and the new facility, and the construction of a levee around the existing plant to alleviate ongoing flooding problems. Amphenol's new plant will be located on Delaware Avenue, near the Sidney K-Mart.

Amphenol's natural gas line, as Daily Star reporter Joe Mahoney points out in a story about the recent grant, would likely come from the Constitution Pipeline -- a proposed 120-mile gas pipeline that would bring gas from northern Pennsylvania to markets in the Northeast, and that has encountered stiff opposition from some local landowners. Amphenol has been a major advocate for the pipeline's construction, and its managers have threatened to take more than 1,000 jobs out of the area if local anti-gas activists prevent the pipeline from being built.

U.S. Senator Chuck Schumer was in town this week to announce the $3.8 million grant for Amphenol. News Channel 34 reported from Schumer's press conference:

Senator Charles Schumer says, "It has stayed loyal to Delaware County where many other companies have picked up and left, Amphenol has stayed here. It's my view that since Amphenol has been here when we needed them, we should be there when they need us. They certainly needed us after the horrible flooding that occurred."

State and local officials have put a lot of money and effort into keeping Amphenol in the region. The current grant joins a previous $20 million package of financial incentives for Amphenol from New York State, announced by Gov. Andrew Cuomo in November of 2011. The New York Power Authority, a state-owned power company, has also committed to giving Amphenol access to low-cost electrical power.

Last summer, when several land deals that were critical to the Amphenol project stalled, the Delaware County Industrial Development Agency sought to seize the land by eminent domain in order to move the relocation forward. (The main holdout in the negotiations later agreed to close the deal voluntarily.)

Gibson's press release about the recent $3.8 million grant states that Amphenol's new site "will be able to be used by other businesses in the future," but does not specify how.