Dispatches from Shandaken: Plumbing the depths of a sewer controversy 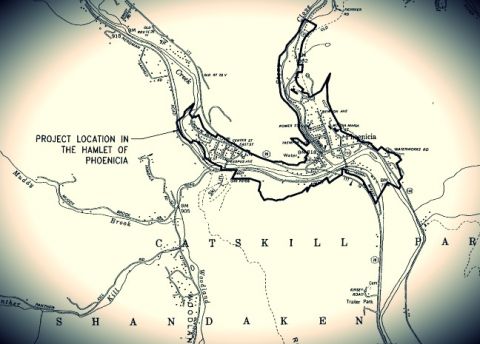 Above: Detail of a map showing the location of a proposed Phoenicia sewer district, the subject of negotiations between the town of Shandaken, the Catskill Watershed Corporation and the New York City Department of Environmental Protection that broke down earlier this month. Source: Lamont Engineers's 2011 project report on the proposed Phoenicia sewer project.

This column had been on hold, waiting for another shoe to drop. Something was bound to change, and it did: New York City pulled a flawed sewers deal for Phoenicia off the table, while continuing to wave a big stick. By steadfastly ignoring all flies in the ointment it was offering, it readily assigns all blame for failing to seal a deal on Shandaken, and those ornery and ungrateful members of the proposed Phoenicia sewer district – all 200-odd potential members of it.

I carefully read the last Engineer’s Review Project Report submitted by the Catskill Watershed Corporation to the Shandaken Town Board regarding the Phoenicia sewer project, and looked at the plan to spend the now-withdrawn money from the DEP. I kept returning to one thought: There’s something wrong with this equation. I didn’t take issue with the technical equations applied by the engineers who did the analysis. To this layperson, at least, their process seemed diligent, and their proposal seems sound.

I had to step back from the details to put a finger on what was wrong. Not surprisingly, the problem involved numbers, but not necessarily the numbers that the CWC delivered with their recommendation for Phoenicia. The numbers in the CWC report were hard and fast, unshakable in their abstract objectivity. There were numbers we were told we must adhere to; and others that we needed to live within. It’s what the CWC engineers had to work with.

The truth is, there never really was a sewer controversy inside Phoenicia worth noting. There is no real disagreement here that, all things being equal, it would be better to have sewers than not. Some accuse opponents of the sewage treatment system of being freeloaders at heart, but rumors of a “free lunch” mentality here are vastly overstated. Any comment heard that the City “should pay for it” (though echoing historical precedents) is mostly shorthand pointing out the vast economic and political power discrepancy that separates huge New York City from tiny Phoenicia.

Here are the numbers that should stand out from that final CWC report. In 2000, using boundaries larger than the proposed sewer district, Phoenicia could only claim 381 residents. Not only is Phoenicia tiny, it is also among the poorest communities in Ulster County, with a median household income of $22,159 (in 1999 dollars) compared to a state average of $43,393. Incomes in Shandaken as a whole, though still low by state standards, are slightly higher, with a median household income of $31,566. But the costs and legal liabilities of operating a sewer system here would fall solely on residents of Phoenicia. Each town and hamlet is its own special case, no matter how often New York City cites other communities that have accepted their deals.

There isn’t surplus income in Phoenicia. Phoenicia may project vitality and life, but many people here are hanging on by the skin of our teeth. What life we have, and hope for a better future, essentially rests on the vitality of our small commercial district. Phoenicia businesses are threatened by septic system compliance regulations on one hand, and the burden of high and uncapped sewer fees on the other. They could be left holding the bag should the proposed multimillion dollar Phoenicia waste treatment system not work out as advertised.

Reasons may vary, but large scale capital investment projects don’t always work out as advertised. In the last couple of years alone, two of the communities who accepted New York City’s offer -- Andes and Boiceville -- were hit with large unexpected expenses because of their sewage systems. They were rescued largely by insurance payments and grants. But insurance rates increase as problems occur, and economic bailouts are increasingly hard to count on. Times are changing.

Since the first sewer plan was rejected by local voters over uncapped potential liabilities, Phoenicia has been at the poker table with a Goliath holding nearly all the cards. New York City sets the ante, New York City owns the pot, New York City demands clean water, and it names the price it is willing to pay for it. And the City-as-enforcer judges what compliance is acceptable, and penalizes for noncompliance. New York City has the resources to extend a deal we dare not refuse. They have the power to pull it back also. They are millions, we are dozens. All we have is water.

Of course I present a one-sided view, but this is mostly a one-sided conflict. The only power Phoenicia has is the power to say no, until we get something we can live with, not just now, but for well into the future. The CWC did what they could to develop the best plan New York City would agree to underwrite on its terms. Resistance would vanish immediately if New York City tangibly capped Phoenicia’s fears of unsustainable costs and liabilities arising now and/or down the road.

It fundamentally comes down to whether a small hamlet like Phoenicia should be encouraged to exist, or instead be put in jeopardy, when larger forces insist it take on obligations it doesn’t have the resources to sensibly commit to. There is another option. The Catskills could be made a wilderness zone. I suppose Ranger Stations could replace Libraries, and bed and breakfast inns could be razed for public camp grounds. But Phoenicia is at the heart of Shandaken, and Shandaken is the heart of much of the current Catskills Park. There are people who like to visit us here, who like what we can offer – for as long as we can afford to stay.