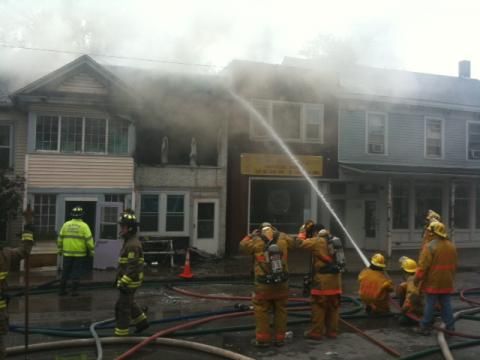 Above: An apartment building in the village of Margaretville burned on Saturday. Photo by Reginald Oberlag.

2:45pm update: We just received more photos and a report from another witness to the fire, Reginald Oberlag. Here's what he sent us via email:

Fire destroyed a multi-family building on Main Street in Margaretville in a blaze that set off the fire department siren at 11:30 Saturday morning. The building adjoins the popular Ming Moon Chinese restaurant and firefighters were continuing to spray water between the 1-foot space separating the two structures and hope to save the Ming Moon building from damage. It was a further blow to the Margaretville Village Main Street struggling to recover from extensive damage from the Hurricane Irene flooding. One resident was overheard saying: "We've had earthquakes, hurricanes, flooding and now fire. What's next, a plague of locusts?"

See Oberlag's photo of the fire at the top of this post.

2:40pm update: Pauline Liu, reporter for the Catskill Mountain News, reports on Facebook that the fire broke out in the apartment building next to Ming Moon, rather than in Ming Moon itself. From her post on Hurricane Storys:

It broke out in the apartment building next door. Electricity to the entire block has been turned off. So sadly, after working so hard to recover, the folks at Ming Moon will be on another forced hiatus.

1:35pm update: We just got word from Watershed Post correspondent J. Blake Killin, who was at the scene of the fire this morning. Here's his report, which he posted as a comment in the Facebook Group Hurricane Storys:

According to a firefighter at the scene, they had just turned the power back on to that building, which houses the popular Ming Moon restaurant. The fire started in one of the upstairs apartments. All residents had been evacuated weeks ago.

1:10pm: An apartment building on Main Street Margaretville caught on fire on Saturday morning, September 17, according to an official at the Margaretville Fire Department and eyewitnesses at the scene.

A man who answered the phone at the Margaretville Fire Department and asked not to be named said that an apartment building next to Ming Moon on Main Street had caught fire this morning, and that six other fire departments had been called in to provide mutual aid. The fire seemed to be under control but still smoldering at 1:10pm, he said.

Photographer Vic Tannenberg was on the scene at 12:15pm and took the photos attached to the bottom of this post. He said that the fire seemed to be under control. See more of Tannenberg's photos here.

Below: Photos of this morning's fire by Vic Tannenberg. 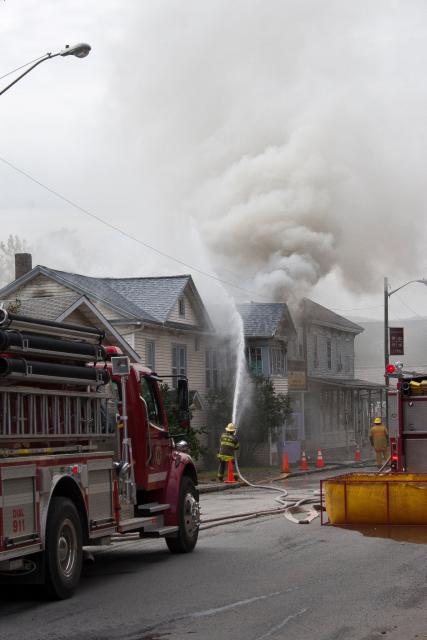