Do IDAs work? Not in Greene County 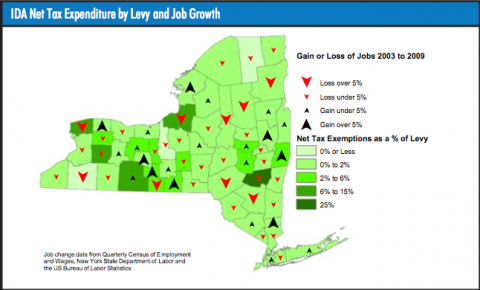 Above: A graph from yesterday's IDA report showing IDA tax breaks and job growth and loss by county. Greene County, in dark green, is picked out for having job loss despite giving out large IDA tax breaks.

New York State Comptroller Thomas DiNapoli struck terror into the hearts of Industrial Development Authorities across the state yesterday when he issued a report, which you can read below and on the Capitol Confidential blog, questioning whether the publicly-funded development organizations create jobs.

[T]here are still shortfalls in the tracking and verification of performance measures, especially where job creation and job retention goals are concerned.

The report singled out Greene County's IDA for special scrutiny. This isn't surprising, because Greene County's IDA made headlines last year for lavishing large bonuses on its executive director, Alexander "Sandy" Mathes. In 2009 alone, Mathes received a $175,000 bonus on top of his $130,000 salary.

DiNapoli's report shows that while Greene County's IDA gives out the largest number of net tax exemptions in the state after New York City's IDA, those exemptions, which amount of 25% of the county's tax levy, did diddly squat for job creation between 2002 and 2009:

The New York City IDA has the largest net exemptions – nearly $144 million. The next highest was Greene County, with $28.7 million ... Notably, in several of the counties with relatively large tax exemptions compared to total levy, there were job losses between 2002 and 2009 – including Greene County (tax exemptions at nearly 25 percent of total levy)[.]

For most of those years, Mathes was at the helm of Greene County's IDA, receiving large bonuses. It's not surprising that he resigned last month.

Hat tip to WGXC for the links.