Have you seen this orchid? 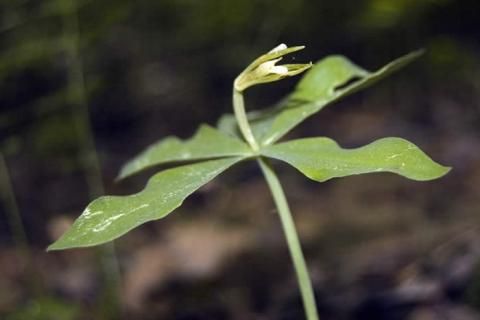 The vanishingly rare Isotria medeoloides, the small whorled pogonia, has just been found again in New York State. The last time it was spotted within our borders was in an Onandaga County swamp in 1976. A press release from the state office of Parks, Recreation and Historic Preservation says that although it's never been common, it has been known to occur in Ulster County:

Small whorled pogonia is present in 17 other states in the Eastern United States and is listed by all 17 of these states as either endangered or threatened. The orchid is also known to appear in one Province of Canada, Ontario, and is listed as endangered by the Canadian government as well. Botanists have spent decades looking for small whorled pogonia throughout New York. It has been collected only five times before 1976, from 1887 to 1923, in Washington, Ulster, Rockland, Nassau and Suffolk Counties.

Who knows? There could be one lurking in your backyard. The U.S. Fish and Wildlife Service describes its habitat thusly:

Habitat - This orchid grows in older hardwood stands of beech, birch, maple, oak, and hickory that have an open understory. Sometimes it grows in stands of softwoods such as hemlock. It prefers acidic soils with a thick layer of dead leaves, often on slopes near small streams.

NY Flora reported this back in June. Naturally, they're thrilled:

Botanists for the New York Natural Heritage Program have rediscovered other rare plants that no one has seen in many decades, sometimes for over 100 years, but this discovery is especially important because it involves a globally rare and federally threatened orchid.

Photo of I. medeoloides in bloom from the New Hampshire Division of Forests and Lands.