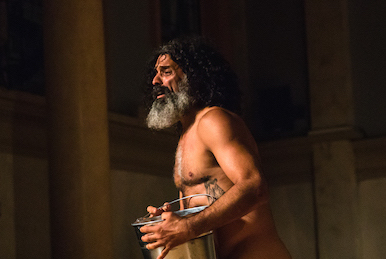 El Pueblo de los Olvidados (The Village of the Forgotten) is a science fiction performance based on Puerto Rico in the wake of Hurricane Maria. When the protagonist, Tony Tacon, returns to his native planet, he discovers its devastation under colonization by an alien species named FIMA. Facing alien invaders, a secret laboratory, a powerful weapon, and a new, trans-sexual species, Tacon must reinvent himself and help free his people from FIMA’s supremacy spell.

Antonio Ramos was born and raised in Puerto Rico where he trained in jazz, salsa, and African dance traditions. His dances celebrate the beauty, fragility, and complexity of human existence with exuberant, multisensorial experiences that highlight the beauty of bodies in their most natural state.

“sheer beauty and style and, some- times in Ramos himself, a kind of ancient classical heroism...This work is clever as hell.” —Eva Yaa Asantewaa, InfiniteBody

Twyla Tharp, legendary choreographer, returns to the mountains
The Calico Indian Dance Showdown brings back the Catskills Anti-Rent Wars
This Weekend: Between the Lines Movement Fundraiser