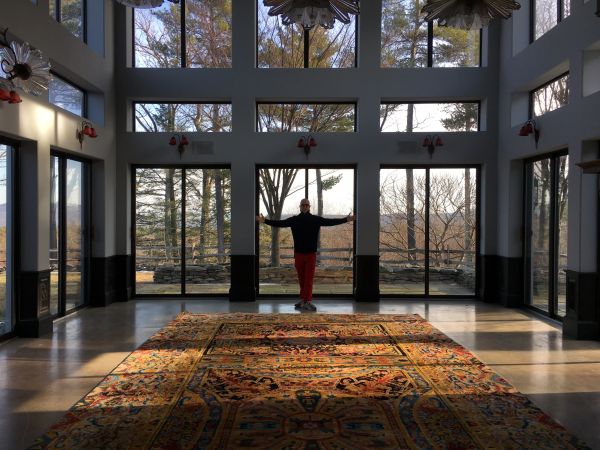 Stephen Petronio Company has been operating out of New York City since 1984, performing dance pieces across the world and collaborating with a vast array of musicians, artists and designers, from Lou Reed and Rufus Wainwright to Cindy Sherman and Anish Kapoor.

In the waning days of 2016, the venerated choreographer made a major move to secure his company's legacy in the dance world, purchasing Crows Nest, a 175-acre property in Round Top. Surrounded by state forest on three sides, Crows Nest will provide a home for Petronio's newly minted Residency Initiative.

The company began fundraising efforts for a permanent space in January of last year. A longtime Putnam County resident, Petronio hadn't originally thought to look in the Catskills for a location, worrying it would be too far from the city. But then Adrienne Willis, the executive director the American Dance Institute, encouraged him to look into spaces on the west side of the Hudson near Lumberyard, the ADI's future home in the town of Catskill.

When Petronio visited Crows Nest, which encompasses two buildings built in 2003 and a 19th-century caretaker's cottage, he knew he'd found the right spot. "Once you see Crows Nest, there's no turning back. It's such an amazingly beautiful place," the choreographer says. "I could not believe my luck. I saw it this summer the first day that it came on the market, and I made an offer the third day. I knew when I saw it that this was everything we had dreamed about."

The company purchased the property for $1.3 million. Petronio plans to begin the residency program in mid-2018, providing two-week stints for up-and-coming dance troupes throughout the summer. In addition to providing rehearsal space and lodging, the program will also pay the artists for their time — a practice Petronio says is unfortunately rare among dance residencies.

"Dancers get very little in their lives, and it's all very ephemeral. So my criteria was that when the dancers pull up [to Crows Nest], I want them to feel like they've died and gone to heaven for a few weeks," he explains. “It’s an isolated place just to get lost and begin to develop ideas without a requirement.”

Though public performances won't take place at Crows Nest, Petronio hopes to bring finished pieces by his company and others to performances venues in the surrounding area — including at Lumberyard, which is also slated to open in 2018. He'd eventually like to collaborate with other dance organizations in the Catskills and beyond to provide burgeoning artists with as many resources as possible.

“There's a group of us from Jacob's Pillow [in the Berkshires] all way over to Round Top that have similar interests in terms of preserving the creative space for dancers,” Petronio says. “For me to give an artist two weeks is great, but if I could link arms with four or five other residency programs and give them experience at various programs throughout the summer, they may have a running start at making a new work.”

As for his own eight-person company, Petronio plans to continue to develop and produce new works in Manhattan. The troupe will begin its third season of “Bloodlines,” an ongoing exploration of postmodern dance masterworks, in March. But once Crows Nest is up and running, he plans to bring his dancers there for residencies a few weeks per year. In the meantime, Petronio and his husband will move into the gatehouse on the property.

Between running both the company and the Residency Initiative — not to mention getting better acquainted with Crows Nest and the surrounding community — it’s a lot to take on. But for Petronio, there’s nothing more important than creating a place where burgeoning choreographers and dancers can have the space, time and resources to work on their art.

“The thing that really is precious to me in my life is the act of going into the studio with a bunch of young bodies and engaging in the creative process,” he says. “In terms of an eventual legacy, I wanted to leave a place where people can really research and develop new dances. That felt like the biggest gift that I could give to the field.”

Twyla Tharp, legendary choreographer, returns to the mountains
The Calico Indian Dance Showdown brings back the Catskills Anti-Rent Wars
This Weekend: Between the Lines Movement Fundraiser