Where to spend the Fourth of July in the Catskills 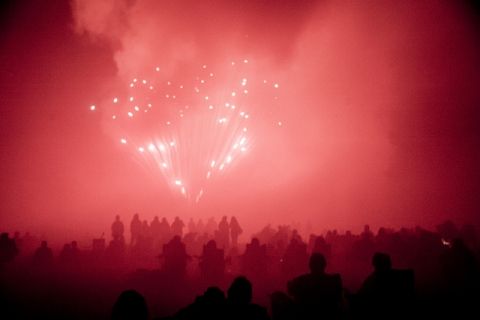 Above: Fireworks at the 2015 Margaretville Fire Department Field Days carnival and fair. Photo by Mark Zilberman, shared in the Watershed Post Flickr pool.

The Catskills are exploding this weekend with traditional Fourth of July fun: BBQ, beer, bands and--of course--blowing up fireworks. Here’s our guide to the good times this Independence Day weekend, which runs from Friday, July 1 to Monday, July 4 this year.

The annual Fair on the Square in Delhi will open on Friday, July 1 from 5 p.m. until 9:30 p.m. with a color guard performance, kids’ games, vendors, food, live music and fireworks.

On Friday, July 1, the Hot Jazz Jumpers will play in Hancock's Town Square from 7:30 p.m. to 9 p.m., part of a summer-long series of free concerts called "Summer Nights Live on the Square."

In Roxbury on Saturday, July 2, a sidewalk festival will occupy the streets from 10 a.m. until 3 p.m., with children’s activities, live music with Story Laurie, crafts, BBQ and poems that will appear on the sidewalks when it rains. At nearby Plattekill Mountain, the Shafer-Frame Band will play from 4 p.m. to 7 p.m. while a pig roast dinner is served.

The East Branch Fire Department will host Firemen's Field Days on Saturday, July 2 and Sunday, July 3 with a softball tournament, live music, a flea market and all the classic food you can eat. They’ll have a parade on Saturday at 6 p.m. and fireworks on both nights.

Above: Art by Anna Sea will appear at the Stagecoach Run Art Festival.

The 21st annual Stagecoach Run Art Festival is this weekend in Treadwell and Franklin, lining scenic County Road 14 with open studios. This year’s Stagecoach Run will honor founders Jane Carr and Joe Kurhacek. Come meet the artists, see cutting-edge works and grab a bite to eat at the Tulip and Rose in Franklln. Saturday, July 2 and Sunday, July 3 3 from 10 a.m. until 5 p.m.

Saturday, July 2 is Delaware Ulster Railroad Opening Day in Arkville. Grab a train ride at 11 a.m. or 2 p.m., go catch some Field Days fun and food in Margaretville and stop back to catch Blues Maneuver at 6:30 p.m. in a special “Twilight on the Rails” performance.

What could be more American than Girls Guns & Glory? Rolling Stone called the band “Modern-day Buddy Holly plus Dwight Yoakam divided by the Mavericks …Think-y, soulful lyrics paired with a beat you can dance to.” And you’re invited to come do just that at the Gala Dance Under the Stars at West Kortright Center in East Meredith on Sunday July 3 from 7 p.m. until 10:30 p.m.

On Monday, July 4, come out to the Hanford Mills Museum in East Meredith for an old-fashioned Independence Day Celebration featuring frog jumping contests, a fishing derby on the Mill Pond, tug o’ war and sack races along with eats (barbecue, fresh churned vanilla ice cream and maple products), live music and steam power demonstrations. The fun is on from 10 a.m. until 5 p.m.

We don’t normally include events on the east bank of the Hudson in our roundups, but this year we’re making an exception for the Family Fun Festival happening from 10 a.m. until 4 p.m. on Saturday, July 2 at the Franklin D. Roosevelt Presidential Library and Museum in Hyde Park. It’s the museum’s 75th anniversary celebration and they’re having a circus, live swing dance music, tethered hot air balloon rides, a raptor show and more on the Great Lawn. The museum will be open for free.

Beat the heat and have a merry Christmas in July with some classic Americana: a production of Thornton Wilder’s “The Long Christmas Dinner” & “Pullman Car Hiawatha.” The two one-act plays by the creator of “Our Town” and three-time Pulitzer Prize winner will be performed on Friday and Saturday, July 1 and 2, at 7 p.m. and on Sunday, July 3 at 2 p.m. at the Doctorow Center for the Performing Arts in Hunter.

On Saturday, July 2, the village of Tannersville will host the annual 23Arts Independence Day Parade at 3 p.m. Live music and a community bash featuring craft beer, BBQ, vendors and hayrides will follow at the Colonial Country Club Golf Course on Main Street, and they’ll have fireworks at dusk.

Festivities in East Durham at the Michael J. Quill Irish Cultural and Sports Centre will begin at 11 a.m. on Saturday, July 2 with a parade along Route 145, continue through the afternoon with kids’ activities and vendors, and explode into fireworks at dusk.

The village of Catskill will be partying down at Dutchman’s Landing Park on Saturday, July 2 from 6:30 p.m. until 9:30 p.m. with the music of Rhythmic Sounds DJ. Fireworks at 9:30 p.m.

Above: The Ramblin' Jug Stompers.

Also in Catskill, over at the Bridge Street Theatre Speakeasy, you can catch New York State’s premiere jug band, the Ramblin’ Jug Stompers, performing “78 rpm Music for the 21st century” on “banjo, mandolin, guitar, washboard and more” at the Sadie Hawkins’ Day Extravaganza. Happening from 7:30 p.m. until 9 p.m. on Saturday, July 2.

On Sunday, July 3, the explosions will be sonic and kinetic as Grammy-award-winning Taiko Master Koji Nakamura and the OMNY Taiko Drummers dominate the stage at the Orpheum on Main Street in Tannersville at 7 p.m. It’s the first of two free performances sponsored by the Catskill Mountain Foundation; the second will be at the Windham Civic Center at 2 p.m. on Monday, July 4.

The town of Windham will be celebrating on Monday, July 4  with a Main Street festival starting at 2 p.m. Music, food, kid stuff and sidewalk sales will be ongoing, a parade marches at 7 p.m. and fireworks set off from Windham Mountain will follow at 9 p.m..

Fireworks will blossom in Cairo after dusk on Monday, July 4 at Angelo Canna Park.

Downtown Cobleskill, where the county normally gets together for Independence Day fun, is under construction this year, but that’s not slowing the party one bit. The Sharon Springs Chamber of Commerce is stepping up to coordinate an “extended weekend” of multiple celebrations, and these folks really know how to extend a weekend. There are festive goings-on all over Schoharie County from Friday, July 1 through Wednesday, July 6:

On Friday, July 1, downtown Middleburgh is having its first First Friday with live music, a farmers’ market and family good times. That same day, the village of Schoharie is hosting something coyly described only as a “Friday night event.”

On Saturday, July 2, starting at 1 p.m., it’s Family Fun Day at the fairgrounds in Cobleskill, with live music, food and fireworks at dusk.

On Monday, July 4, they’ll have a parade in Sharon Springs at 10 a.m., followed by food and music in Chalybeate Park.

Also on Monday, July 4, a living history celebration will be held from 1 p.m. until 4 p.m. at the Old Stone Fort in Schoharie.

Then on Wednesday, July 6, the Sharon Springs Arts Council is hosting a concert in Chalybeate Park at 7 p.m.

They’ll be painting Roscoe red, white and blue on Saturday, July 2. The celebrating starts with a parade stepping off at 11 a.m., rain or shine, and continuing with a Car Show and Brewery Party with live music, food and fun on the Roscoe Beer Company lawn.

Over in Bethel, a party commences at the Woodstock site on Saturday July 2 at 3 p.m. It’s the 10th anniversary of the Bethel Woods Center for the Arts, and they’re celebrating with A Gathering at Bethel Woods: live music, guided museum tours, interpretive walks and talks about the historic Woodstock festival site, as well as a variety of activities and games, collaborative art projects and an array of arts and educational programs for the whole family. The festivities are topped off by a fireworks display over the historic Woodstock festival field. Afterwards, head across the street to the Dancing Cat Saloon to gather ‘round the bonfire.

Above: Fireworks at the Monticello Raceway in 2014. Photo by John Kocijanski, shared in the Watershed Post Flickr pool.

The Monticello Raceway and Casino will shoot off its annual Independence Day Fireworks Show at 10 p.m. on Saturday, July 3.

Rides, live music, stiltwalkers and fireworks come to Morningside Park in Hurleyville on Sunday, July 3 as part of the town of Fallsburg's Independence Day celebration. The funs starts at 2 p.m. and runs until 10 p.m.

Come celebrate Liberty on the Fourth of July at the one and only Liberty Festival. They plan to make it the biggest and best ever. The celebration, with a car show, live music, vendors, bouncy houses and other kids’ goodies, starts at 10:30 a.m. and runs until 4 p.m.; there’s a parade at noon and fireworks at dusk.

New Paltz begins its holiday celebrations on Friday, July 1 at the Ulster County Fairgrounds on Libertyville Road. The fun starts at 5 p.m. with food trucks, fun experiences for kids and music by The Saints of Swing and Soul Purpose. Emcee Carl Welden will lead the festivities and Esme Hyman will sing the national anthem. Fireworks begin at dusk. Admission is free.

The Accord Speedway’s Fireworks Extravaganza celebration starts at 5 p.m. on Friday, July 1 and will include a chicken BBQ and live music from the Black Dirt Bandits along with the evening’s program of racing on the dirt track oval.

Above: Reenactors with the 5th New York Regiment, who will come to New Paltz this weekend.

On Saturday, July 2, reenactors of the 5th New York Regiment will descend on Historic Huguenot Street in New Paltz for “New Paltz in the War for Independence,” a Revolutionary War reenactment. There will be demonstrations and displays focusing on both period weaponry and warfare and various aspects of civilian life going on from 10 a.m. until 5:30 p.m.

Also on Saturday, July 2 in Highmount, the Belleayre Music Festival kicks of its rebooted summer concert series with The Yardbirds, who play at 8 p.m. at the Belleayre Mountain Ski Center.

When it comes to Hudson Valley fireworks viewing, the Walkway Over the Hudson 4th of July Fireworks Spectacular is definitely the catbird’s seat. You can get tickets online or at various businesses in Highland and Poughkeepsie. Gates open at 6:30 p.m. on Saturday, July 2, and the fireworks begin at 9.

Ellenville will hold its traditional Independence Day Parade blowout on Monday, July 4 at noon; fireworks will commence at dusk at the Joseph Y. Resnick airport.

The traditional Fourth of July parade steps off in Saugerties at 11 a.m. on Monday, July 4  Fireworks will explode after dark at Cantine Field.