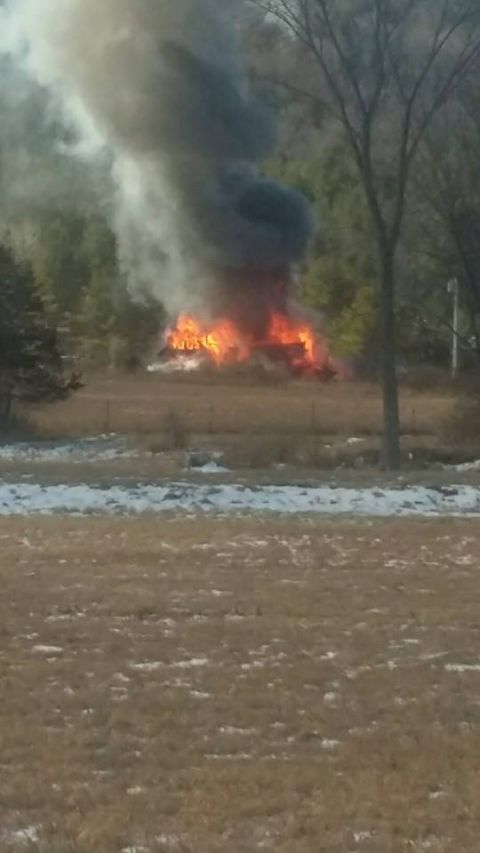 Above: The Gilboa home of Don and Kristine Mowers was destroyed on Feb. 14. Photo via Schoharie County Fire Wire & News.

Three Gilboa residents were left homeless after a fire destroyed their home in Schoharie County on the frigid morning of Sunday, Feb. 14.

The Pine Tree Lane home of Don and Kristine Mowers caught fire around 10 a.m. on Valentine's Day morning and was completely destroyed by the blaze, officials say. The couple, along with their adult son Glen, all made it out of the house safely.

Located in the Grand Gorge Fire District, the Mowers residence caught on fire during one of the worst cold snaps of this winter. Temperatures across the Catskills dipped to 20 degrees below zero on Sunday morning.

Although the fire trucks did freeze up as dozens of firefighters battled the blaze on Sunday morning, "everything went pretty smoothly,” said Hank Gockel, the second assistant fire chief of the Grand Gorge Fire Department.

In addition to the 25 to 30 firemen that were on the scene, representatives of the Red Cross were called to assist the family, Gockel said. The Mowers "were doing good when we left on Sunday night,” he said.

The cause of the fire is still under investigation, but Gockel said that it was likely an accident. Responders from the Grand Gorge, Roxbury, Conesville, and Stamford Fire Departments were at the site of the fire.

The Gilboa community is rallying to support the Mowers as they rebuild after the fire.

One of the Mowers’ neighbors is Jen Warner, the owner of Jen's Hair Shop. Warner, who says that she has known the Mowers for 20 years, is coordinating a community effort to assist the displaced family.

Describing the Mowers as "very church oriented" and "very nice people," Warner is accepting donations for them at her shop and is in the process of setting up a donation fund in their name at the NBT Bank in Grand Gorge.

The Mowers were going through difficult times before the fire, Warner said. Don Mowers recently had open heart surgery, while Kristine Mowers has been battling breast cancer, she said. The couple also cares for their adult son, who has a developmental disability, while running their barbecue business, Catskill Mtn. BBQ in Grande Gorge.

Warner said that the Mowers need many items, including personal hygiene and food products, baking and pasta pans, and two beds: a king size and a full size bed. The Mowers are currently staying at a friend's house until April, she said.